Total has signed two new 40-year concession agreements with the Supreme Petroleum Council of the Emirate of Abu Dhabi (United Arab Emirates) and the Abu Dhabi National Oil Company (ADNOC). In the frame of these agreements, Total is granted a 20% participating interest in the new Umm Shaif & Nasr concession and 5% in the Lower Zakum concession, effective March 9th, 2018, for a total participation fee of 1.45 billion dollars, which represents an access cost of around 1 dollar per barrel of reserves. These interests bring to Total a production of 80,000 barrels of oil per day in 2018.

Located about 135 and 65 kilometres off the coast respectively, Umm Shaif and Lower Zakum are two of the major fields offshore and counting for around 20% of Abu Dhabi production. In addition to the huge oil reserves and the potential to grow oil production beyond 450,000 barrels per day (including Nasr – the present production being at around 300,000 barrels per day), Umm Shaif also contains a giant gas-cap, which is to be developed in the scope of the concession with a gas production target of 500 mmscfd. ADNOC Offshore (100% owned by ADNOC) will be the operator of all concessions offshore Abu Dhabi, to which Total, as a partner in the concessions, will bring its expertise by providing personnel and carrying out studies. 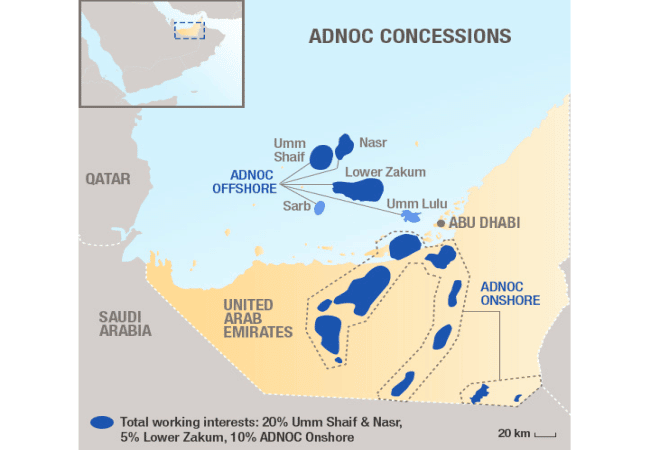 “These agreements represent another major milestone in our long-standing partnership with Abu Dhabi and ADNOC that dates back to 1939. Following the signing of the ADNOC Onshore concession in 2015, they confirm our commitment to ADNOC for the next 40 years,” said Patrick Pouyanné, Chairman and CEO of Total. “With a 25% overall participating interest in two concessions, we are honored that ADNOC chose Total as its main partner on these offshore concessions that contain giant reserves with low technical costs and offer significant growth potential. In particular, we are delighted with the trust that ADNOC demonstrated by granting us a 20% participating interest in the Umm Shaif & Nasr concession, and therefore to be the leading partner on this asset. We intend to bring all of our competencies in order to make the most of the upside coming from the gas reserves, while we develop the oil production in the most effective way.”

“For nearly 80 years, Total has partnered with Abu Dhabi in the development of our oil and gas resources and has closely collaborated with ADNOC across various stages of our value chain,” stated Dr Sultan Ahmed Al Jaber, ADNOC Chief Executive Officer. “Today’s announcement marks an important step to further strengthen our mutually beneficial and value-adding partnership with one of the world’s largest integrated upstream and downstream companies.”

In addition, as part of this partnership, Total has also extended its concession with ADNOC in the offshore Abu Al Bu Koosh field, operated by Total with a 100% interest, for three more years. This field produces approximately 10,000 barrels per day.

Total in the United Arab Emirates

Total has been present in the United Arab Emirates for almost 80 years and has built a strong presence, reflected by the size and diversity of its assets and partnerships. The Group’s equity production in 2017 in the Emirates was 290,000 boe/d.

In partnership with ADNOC, Total holds, in addition to the new Umm Shaif & Nasr (20%) and Lower Zakum (5%) participating interests:

In partnership with Mubadala, a company owned by the government of Abu Dhabi, Total holds a 24.5% stake in Dolphin Energy Ltd.

In the power production sector, Total is also a partner in the Shams project, the world’s largest concentrated solar power plant in operation (100 MW), inaugurated in 2013, and since 2001 in the Taweelah water desalination and power plant, which produces around 20% of Abu Dhabi’s water and power consumption.

The Group also has a leading position in the manufacturing and marketing of a wide range of automotive and industrial lubricants with a blending plant in the Emirates, supplying the whole region.