Maersk Oil will become part of a leading global oil and gas operator with a long-term investment interest in the sector. Total will take over Maersk Oil’s entire organisation, portfolio, obligations and rights with minimal pre-conditions. Planned development schedules and investments in strategic and sanctioned projects will be upheld.

With the agreement A.P. Moller – Maersk is taking a material step forward in its strategy to separate out its oil and oil related activities to create an integrated transport & logistics company, and this transaction will contribute significantly to upholding its strong capital structure. 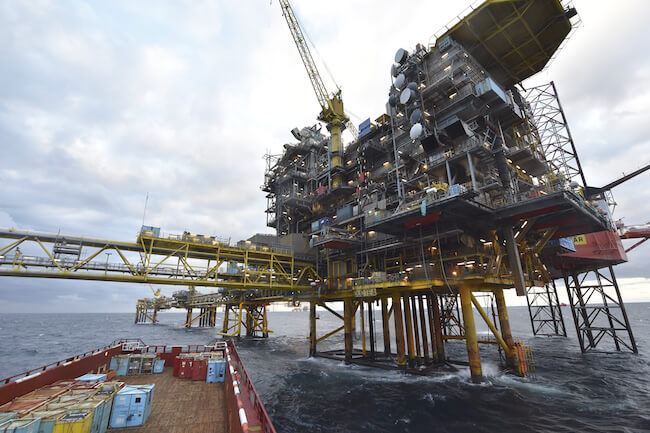 “In determining the best future ownership structure for Maersk Oil, it has been imperative for us that the capabilities and assets created in Maersk Oil continue to be developed, and that long-term investments are upheld, especially in the Danish part of the North Sea,” says Søren Skou, CEO of A.P. Moller – Maersk and continues:

“The valuation of Maersk Oil and Total’s commitment is a testament to the quality and standing of Maersk Oil. In addition, the agreement will strengthen the financial flexibility of A.P. Moller – Maersk and free up resources to focus our future growth on container shipping, ports and logistics.”

Denmark will become the regional hub for all Total’s operations in Denmark, Norway and the Netherlands, based on Maersk Oil’s capabilities and strong position in the North Sea region.

“Maersk Oil’s activities across the North Sea will become part of a leading global operator with a strong performance record and long-term growth interest in the sector. The combination of Total and Maersk Oil’s global footprint and geographical overlap will ensure the continued development of Maersk Oil’s worldwide strategic and selective assets. By selling to Total, we ensure a continued Danish stronghold in the North Sea based on Maersk Oil’s leading position within technology development and its track record as a lean, efficient and trusted partner. Importantly, Maersk Oil will remain close to its technology and innovation partners at the Danish technical institutions and in the oil and gas service industry to the benefit of all parties,” says Claus V. Hemmingsen, Vice CEO of A.P. Moller – Maersk and CEO of the Energy division.

Patrick Pouyanné, Chairman and CEO of Total, commented that:

“I welcome Maersk Oil to the Total family. Building on Maersk Oil’s high safety standards, strong technological leadership, operational excellence and strong Danish heritage, we will intensify and accelerate the push to optimise and extend the Danish oil and gas production. The addition of Maersk Oil’s strong capabilities and high quality assets to our business will create a leading international operator in the North West European offshore region, making Denmark a regional anchor point for Total’s North Sea business. With Maersk Oil’s technical and operating competencies and Total’s experience and strong financial position, we have an exceptional opportunity to boost the combined competitive position in several core upstream regions and deliver growth, value creation and career opportunities.”

A.P. Moller – Maersk has been the main operator in the Danish North Sea for half a century, establishing and maintaining Denmark’s position as self-sufficient within oil and gas. With Maersk Oil at the forefront, the Danish oil and gas industry has contributed DKK 400bn in taxes to Denmark over the past 50 years, and provides employment to 15.000 people in the sector. In addition, Maersk Oil has significant presence in the British and Norwegian sectors, with nine licenses in Norway, including an 8.44% ownership of Johan Sverdrup, one of Norway’s largest discoveries ever. In the United Kingdom, Maersk Oil operates several offshore installations, as well as leading a number of project developments; most notably the Culzean gas development, where Maersk Oil is the operator and holds a 49.9 % ownership.

“Our future position as the regional hub for Total’s operations in Denmark, Norway and the Netherlands, recognises Maersk Oil’s status in the North Sea region. In Denmark, the focus will continue to be on investing in safe, efficient growth from existing fields. The capabilities, experiences and partnerships, which made Maersk Oil a globally recognised technology leader and trusted operator, will contribute to Total’s position in the entire North Sea and worldwide. In addition, the agreement presents new opportunities for our employees, as Maersk Oil joins a global industry leader,” says Gretchen Watkins, CEO of Maersk Oil.

The separation of the energy businesses was decided as part of last year’s strategic decision to focus A.P. Moller – Maersk’s future activities on transport and logistics, as well as a result of recent years’ oil and gas industry and market developments. Maersk Oil is the first of the four energy companies of A.P. Moller – Maersk for which a future structural solution has now been identified. The solutions for Maersk Drilling, Maersk Supply Service and Maersk Tankers remain to be defined before the end of 2018.

“In my heart and mind, this is a very difficult, but right decision. Maersk Oil has for almost half a century been at the forefront of the Danish oil development, been vital to A.P. Moller – Maersk and to this very day plays a decisive role in the Danish and international oil and gas industry. This gives us pride. As owners, we seek the best foundation for the future growth of the Maersk Oil activities and the focused development of the Danish North Sea. A.P. Møller – Mærsk A/S has found a dedicated industry owner with a sincere interest in further developing and investing in the assets and capabilities created in Maersk Oil, while preserving the heritage of Denmark’s leading oil company. On behalf of A.P. Moller Holding, I wish to thank all our employees in Maersk Oil for their vast achievements and relentless dedication to A.P. Moller – Maersk.”

The agreement is subject to regulatory approval from relevant authorities, including the Danish Minister of Energy, Utilities and Climate and relevant competition authorities. Closing is expected to take place during first quarter, 2018.