An announcement by the authorities of Netherlands has knocked open a new window into the Dutch criminal underworld with its discovery of torture chambers found hidden inside make-shift shipping containers.

On June 22nd, 2020, the officers held a raid at the site at Wouwse Plantage, on the Dutch-Belgian borders after being tipped off by encrypted messages from an EncroChat phone. According to the National Crime Agency (NCA) in the UK, EncroChat is a secure messaging service, used as a criminal marketplace to co-ordinate the distribution of illegal cargo, money laundering as well as rival killings by over 60,000 users.

The message called the warehouse a “treatment room” and “ebi” which is suspected to be a reference to a Dutch prison of high-security. It also included pictures of the containers, dentist chairs with arm and foot straps, etc. While one container had been sound-proofed with heat-insulation tapes and used as a torture chamber, the other containers (found with handcuffs) are presumed to have been used as a lock-up cell for victims. The police had placed CCTV surveillance and warned potential victims beforehand, who have now gone into hiding.

Authorities claim that a number of serious violent crimes had been prevented owing to the raid. Six men have now been arrested on suspicion of crimes that comprise serious assaults and kidnapping. The suspects are now detained for 90 days in view of the investigation.

Almost 100 suspects have been arrested over the months through successful raids carried out by the UK and European police, after the French Police successfully cracked the communication network. Firearms, 8000 kilograms of cocaine and 1200 kilograms of crystal meth have been seized too, along with the successful dismantling of 19 drug labs 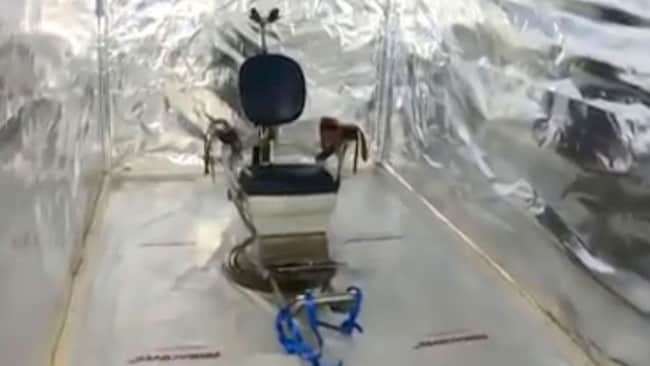 A thorough search of the containers revealed tools like handcuffs, black cotton bags, hedge cutters, scalpels, and pliers, assumed to have been used to threaten or torture victims in the chambers. 24 kilos of MDMA were also discovered. Delivery vans, a total of 25 weapons, and 2 BMWs were among all the raid-discoveries.

The raid is believed to have come about after investigating leads since April through decoding the EncroChat messages. Head of Police’s National Investigation Service, Andy Kraag stated that the results of the ‘26Lemont’ (code-name of investigation) have led to great results. “…and take it from me, many more results will follow”, he said.