Within an interval of three hours on 17 Jun 15, three vessels while underway in the eastbound lane of the Straits of Malacca and Singapore were reportedly boarded in close proximity with each other within 4-10 nm; as described below:

a. At or about 0221 hrs, a Brazil-registered bulk carrier, Densa Shark was underway at approximately 1.1 nm south-southwest of Pulau Takong Kecil when three perpetrators armed with knives were sighted in the engine room. The crew immediately raised the alarm and conducted a search. No perpetrators were found onboard and nothing was missing.

b. Within two and a half hours later, at or about 0503 hrs, a Norway-registered LNG tanker, Clipper Posh while underway at approximately 3.9 nm northeast of Pulau Takong Kecil when five perpetrators were sighted in the engine room. The alarm was raised immediately and the master conducted a search for the perpetrators but none was found. Nothing was missing.

c. Less than half an hour later, at or about 0525 hrs, a Panama-registered tanker, Pro Triumph while underway at approximately 6.9 nm southwest of Pulau Takong Kecil when five perpetrators were sighted in the engine room. The Chief Engineer and 1st Engineer were tied, and some generator spares parts were stolen. The alarm was raised and the perpetrators fled. 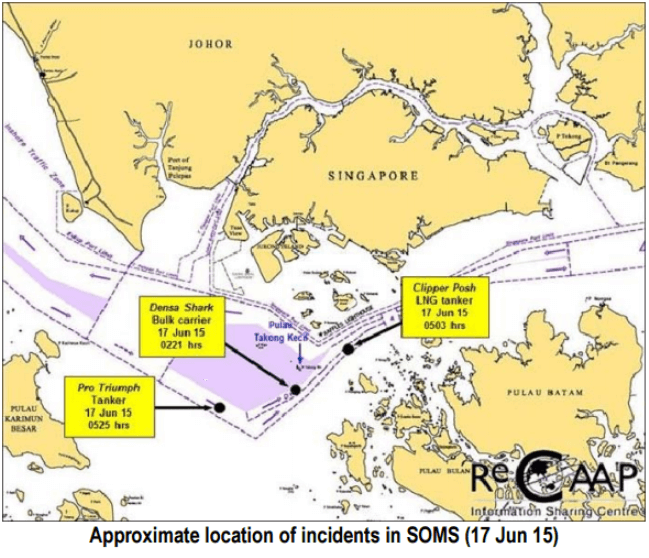 Though these incidents were deemed as ‘petty theft’ in nature, it warrants ships to pay greater attention to shipboard security as access/authorized boarding has been breached.

Notably, vessels were more vulnerable particularly those with low free board and navigating at slower speed when negotiating a turn in the area.

Enhanced vigilance, early detection of perpetrators and activation of the alarm immediately are some of the key actions towards preventing boarding. However, should boarding takes place, immediate reporting to the nearest coastal State are encouraged. The ReCAAP ISC recommends all vessels operating in this area to exercise enhanced vigilance and take extra precautionary measures while underway, and the relevant littoral States to step up surveillance and patrols.