Theodore Roosevelt, the flagship of Carrier Strike Group (CSG) 9, and Bunker Hill will join USS Halsey (DDG 97), USS Sampson (DDG 102) and USS Preble (DDG 88) for a routine deployment. The Theodore Roosevelt Carrier Strike Group deployment is an example of the U.S. Navy’s routine presence in waters around the globe displaying our commitment to stability, regional cooperation and economic prosperity for all nations. 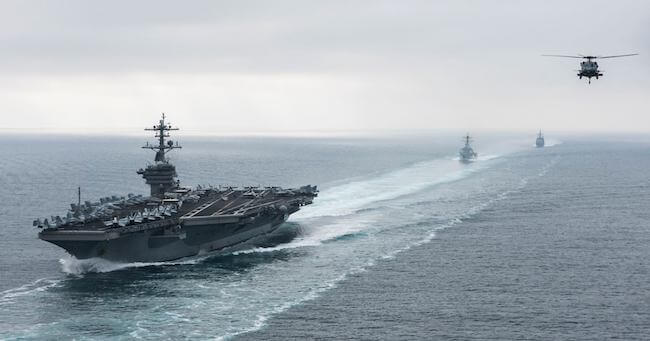 “The U.S. Navy carrier strike group is the most versatile, capable force at sea,” said Rear Adm. Steve Koehler, commander of CSG 9. “After nearly a year of training and integration exercises, the entire team is ready as a warfighting force and ready to carry out the nation’s tasking.”

Bunker Hill was commissioned into service in September 1986. It is the second United States warship to bear the name, the first being an Essex class aircraft carrier that was built during WWII. Her last deployment ended with her return to San Diego in June 2015.

“I have every confidence the Sailors aboard Bunker Hill will carry out their duty meritoriously,” said Capt. Joe Cahill, Bunker Hill’s commanding officer. “We have trained for this, and we are ready to go.”

The strike group will deploy with approximately 7,500 Sailors and Marines and will focus on maritime security operation and theater security cooperation efforts in both U.S. 7th and 5th Fleet areas of operation.

“It is a privilege and joy to lead this magnificent crew out on deployment,” said Capt. Carlos Sardiello, Theodore Roosevelt’s commanding officer. “We are grateful for the steadfast assistance provided by those responsible for maning, training and equipping this ship and air wing team, as well as the support and sacrifice of our families and friends in San Diego and beyond.”

This is the first deployment for Theodore Roosevelt to depart its homeport of San Diego after completing an unprecedented three-carrier hull swap and around-the-world deployment in 2015.

Theodore Roosevelt Carrier Strike Group is part of U.S. 3rd Fleet, which leads naval forces in the Pacific and provides the realistic, relevant training necessary for an effective global Navy. U.S. 3rd Fleet constantly coordinates with U.S. 7th Fleet to plan and execute missions based on their complementary strengths to promote ongoing peace, security, and stability throughout the entire Pacific theater of operations.

Tags: us navy us navy ships