You are here: Home › Shipping News › The Oceans Can’t Take Any More: Researchers Fear A Fundamental Change In The Oceans
TwitterFacebookLinkedInPinterestBuffer

Our oceans need an immediate and substantial reduction of anthropogenic greenhouse gas emissions. If that doesn’t happen, we could see far-reaching and largely irreversible impacts on marine ecosystems, which would especially be felt in developing countries. That’s the conclusion of a new review study published today in the journal Science. In the study, the research team from the Ocean 2015 initiative assesses the latest findings on the risks that climate change poses for our oceans, and demonstrates how fundamentally marine ecosystems are likely to change if human beings continue to produce just as much greenhouse gases as before.

Since the pre-industrial era, the carbon dioxide concentration in the atmosphere has risen from 278 to 400 ppm (parts per million) – a 40 percent increase that has produced massive changes in the oceans. “To date, the oceans have essentially been the planet’s refrigerator and carbon dioxide storage locker. For instance, since the 1970s they’ve absorbed roughly 93 percent of the additional heat produced by the greenhouse effect, greatly helping to slow the warming of our planet,” explains Prof Hans-Otto Pörtner, co-author of the new Ocean 2015 study and a researcher at the Alfred Wegener Institute, Helmholtz Centre for Polar and Marine Research.

But the oceans have also paid a high price: as far down as 700 metres the water temperatures have risen, which has forced some species to migrate up to 400 kilometres closer to the Earth’s poles within the past decade. Given the increasing acidification in many regions, it’s becoming more and more difficult for corals and bivalves to form their calcium carbonate skeletons. In Greenland and the western Arctic, the ice is melting at an alarming rate, contributing to rising sea levels. As a result of these factors, the biological, physical and chemical processes at work in marine ecosystems are changing – which will have far-reaching consequences for marine life and humans alike. 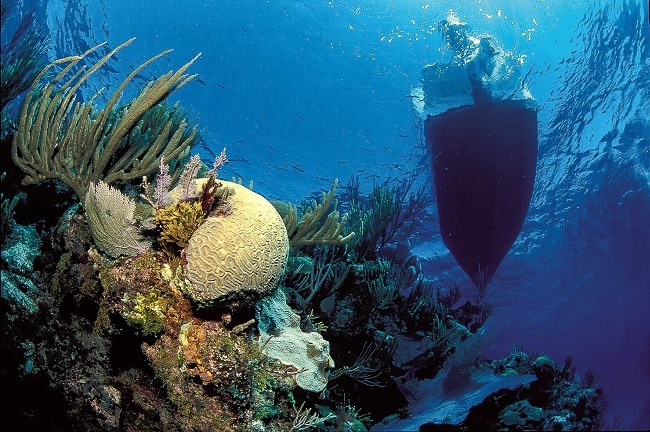 In their new study, the research team from the Ocean 2015 initiative employs two emissions scenarios (Scenario 1: Achieving the 2-degree goal / Scenario 2: Business as usual) to compile the main findings of the IPCC’s 5th Assessment Report and the latest professional literature, and to assess those findings with regard to the risks for our oceans. “If we can successfully limit the rise in air temperature to two degrees Celsius through the year 2100, the risks, especially for warm-water corals and bivalves in low to middle latitudes, will become critical. However, the remaining risks will remain fairly moderate,” explains lead author Jean-Pierre Gattuso. But a rapid and comprehensive reduction of carbon dioxide emissions would be needed in order to achieve this ideal option, he adds.

If instead carbon dioxide emissions remain at their current level of 36 billion tonnes per year (the 2013 level), the situation will escalate dramatically. “If we just go on with business as usual, by the end of this century the changes will hit nearly every ecosystem in the oceans and cause irreparable harm for marine life,” claims Pörtner. This would in turn have massive impacts on all areas in which human beings use the oceans – whether in capture fisheries, tourism or in coastal protection.

Further, the researchers point out that with every further increase in the carbon dioxide concentration in the atmosphere, the available options for protecting, adapting and regenerating the oceans dwindle. As the authors summarise in the closing words of their study: “The ocean provides compelling arguments for rapid reductions in CO2 emissions and eventually atmospheric CO2 drawdown. Hence, any new global climate agreement that does not minimize the impacts on the ocean will be inadequate.”

The researchers’ statement above all addresses those individuals who will attend the international climate conference COP21 in Paris this December. Their study offers four key takeaway messages for the negotiators and decision-makers who will convene there:

The Ocean 2015 initiative was launched to provide extensive information on the future of the oceans as a resource for decision-makers participating in the COP21 conference. The international research team is supported by the Prince Albert II of Monaco Foundation, the Ocean Acidification International Coordination Center of the International Atomic Energy Agency; the BNP Paribas Foundation and the Monégasque Association for Ocean Acidification.

Over the past several years, publications by researchers from the Alfred Wegener Institute, Helmholtz Centre for Polar and Marine Research, have greatly contributed to our current state of knowledge. One of the chief questions their efforts addresses is: “How will climate change affect ecosystems in the polar regions?”.