Bigger container ships are resulting in much greater peaks in container terminal activity. This, together with the ever larger combined volumes of bigger alliances, demands fewer, larger terminals in each port. Terminal operators are reacting by consolidating terminal layouts and ownership – and by working more closely together – but what are the consequences for their customers?

A recent visit to the Eurogate terminal in Hamburg by China Shipping’s post-Panamax vessel CSCL Le Havreinvolved an exchange of 11,600 teu, illustrating the sheer scale of volumes per call that terminals increasingly have to deal with. The vessel is shared with CMA CGM and UASC.

Whilst this was an extreme example, even at more typical levels each call by an Ultra-Large Container Vessel (ULCV) can be expected to generate upwards of 5,000 teu of activity for a terminal (see Figure 1). This peaking demands larger, more capable terminals than before, even if the annual throughput is no greater.

Alliances are also having a huge impact on terminals. At the Port of Antwerp for example, MSC alone accounts for a massive throughput of 4.5 million teu per annum, around half of the port’s container traffic.  To this will soon be added the volumes of its P3 Alliance partners Maersk Line and CMA CGM, ideally all accommodated in one terminal.

The knock-on effects of bigger ships and alliances are already becoming apparent therefore. Numerous reshuffles of terminals both physically (in terms of layout and location) and in terms of ownership are being triggered. For example, in Antwerp, MSC has been given the go ahead to move its traffic from its terminal behind the locks to an enhanced riverside facility in the Deurganckdok. The move will see the redevelopment and expansion of the existing PSA terminal to create the MSC PSA European Terminal (MPET) with an initial capacity of more than seven million teu p.a. and able to play host to all three P3 carriers.

Meanwhile in the US, last year saw the Port of Oakland facilitate the expansion of SSA Marine’s Oakland International Container Terminal, taking over the former APL and Hanjin terminals and creating a single, much larger terminal with a linear berthing line, able to accommodate bigger ships and greater volumes.

The formation and expansion of alliances has resulted in many carriers (or related terminal companies) having terminal interests which do not neatly correspond with those of their alliance partners. This is especially challenging on the USWC with its history of each carrier having its own terminal in each main port, but the complexity is also evident elsewhere, for example for the P3 Alliance in North Europe, as Table 1 shows. Whilst each P3 carrier has a direct or indirect connection to a number of Benelux and German terminals, none of them coincide. Streamlining and unifying terminal facilities, ownership and usage by alliances is not a straightforward task therefore. 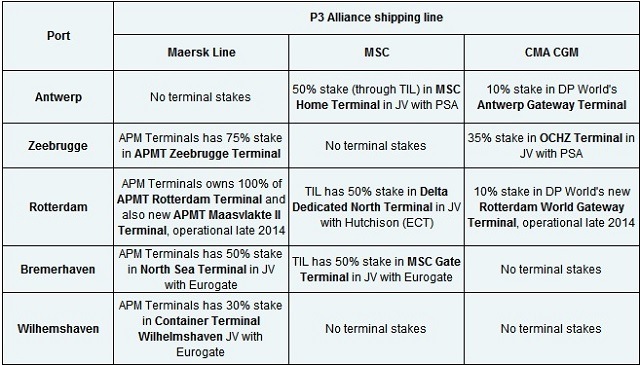 Besides the physical and commercial consolidation of terminals, another important trend is also evident. Global/international terminal operators (GTOs/ITOs), whilst competing strongly with each other in many places, are also increasingly opting to cooperate in selected locations.

APM Terminals (APMT) and MSC-affiliated Terminal Investment Limited (TIL) for example, now have joint ownership of terminals in Santos, Callao and Marseilles-Fos. In addition, the A.P. Moller-Maersk Group has signed a strategic cooperation MOU with China Shipping (Group) on container terminals. China Shipping Terminal Development, the terminals arm of the group, is said to be seeking to expand its European port network.

Meanwhile ICTSI has reached an agreement with CMA CGM (CMA Terminals) to sell it a 25% stake in its Lekki terminal. Lekki is a large greenfield port complex being developed 60 km east of Lagos, Nigeria. ICTSI has also made an agreement with PSA in Buenaventura, Colombia to jointly develop a new terminal. Originally this project was solely ICTSI as the international operator, and PSA has joined the deal. Neither company has said why PSA has taken a stake, other than that both companies share the same aspirations for the port, and that they would bring ‘complementary strengths’.  Given the similar nature of both companies it is not clear what these are and perhaps the main purpose is that it allows the spreading of risk on the project.

The extent to which these various GTO/ITO collaborations are being driven by the increasing size of both ships and carrier alliances is not clear, but what is evident is that bigger ships and bigger alliances increase the challenges and risks for GTOs/ITOs. Greater cooperation is one way to mitigate this.

The growth in ship size and alliances means less ocean carrier product differentiation as far as shippers are concerned, who argue that container shipping is increasingly becoming ‘a commodity’. Container terminals though will retain their differentiation, despite their increasing size and greater homogenisation of ownership, due to factors such as service levels, infrastructure, location and inland connectivity. This should ensure that terminal operators are able to maintain their price levels, or indeed arguably increase them given the extra demands being placed on them by ocean carriers.