In late 2015, Teekay LNG Partners entered into a joint venture partnership with The National Oil & Gas Authority (NOGA) of Bahrain, Gulf Investment Corporation (GIC) and Samsung Construction and Trading (SCT) to form a company called Bahrain LNG (BLNG). The new venture has been contracted to deliver an LNG import terminal in Bahrain to NOGA, with a Commercial Start Date in 2019 for 20 years.

The terminal layout comprises of an offshore dual jetty and regasification module which is protected by a 600m long breakwater, a subsea pipeline to shore and onshore infrastructure to allow the gas to be delivered to the onshore delivery point. Teekay LNG Partners will provide the ‘Bahrain Spirit’ Floating Storage Unit (FSU) into the project, securing one of their DSME newbuilds on a long-term charter. 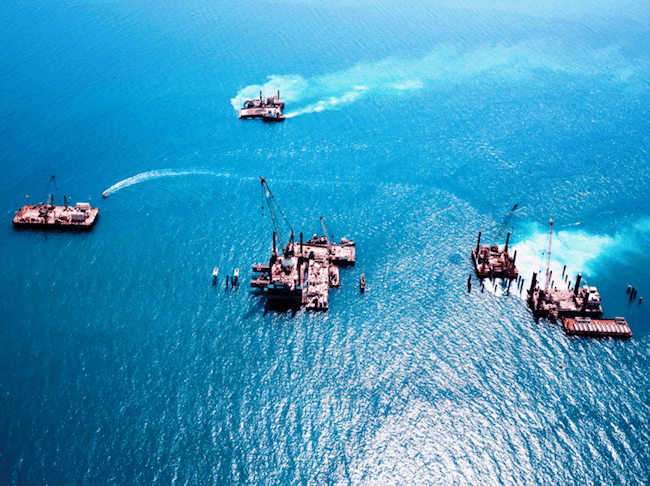 Around 600,000 tonnes of rock have been placed into the water already as part of the breakwater construction, over 40,000m3 of material dredged for the access channel, 53 piles have been driven into the seabed and over 1,800m3 of concrete has been poured onshore. In parallel to construction work in Bahrain, the regasification topside module is being built at the CUEL Construction yard in Laem Chabang, Thailand, where steel cutting took place in May 2017. The platform jacket will be constructed at SamKang M&T in Goseong, South Korea, where construction activities have just commenced. When fabrication has been completed, both the jacket and regasification module will be transported by a heavy lift ship to Bahrain and installed at the offshore site. The FSU is under construction at Daewoo Shipbuilding & Marine Engineering (DSME) in South Korea, with dock assembly scheduled to commence within 3Q/2017.

With the summer heat, Bahrain can prove to be a difficult place to work… with temperatures reaching high 40’s (oC) earlier this year! In these tough conditions, safety continues to be the highest priority.

In June 2017, the EPC Contractor reached 1 million man-hours LTI (Loss-Time Injury) free. This is a major achievement for the project worth celebrating.