One of the most characteristic developments in 2015 was the declining price of crude oil during the second half of the year. Brent crude oil dropped from USD 57 a barrel (bbl.) on 1 July to hit USD 37 a bbl. on the last trading day in 2015. Going into 2016, the trend has continued and for the first time since April 2004, Brent crude oil and WTI light has traded below USD 30 a bbl.

More than anything else, the healthy refinery margins that have followed in the wake of the lower input price has stimulated oil products trading and refinery throughput. This has been a strong boost to overall oil tanker demand. Freight rates would not have reached the highest levels seen since Q4-2014, especially for crude oil tankers without it. This positive result was achieved via a prudent multi-year slowdown in fleet growth.

The production of crude oil is still higher than consumption and many are seizing the opportunity to increase their inventories while the prices are perceived as low. According to the US Energy Information Administration (EIA), the current US crude oil inventories of around 482 million barrels is at a level unlike any of the previous winters going back 80 years. Current inventories are about 100 million barrels above the normal seasonal levels.

Going forward, this large-scale stockpiling poses a threat to tanker demand once they stop stockpiling and start running down inventories. BIMCO expects that a “correction” in demand may be fairly steep once it arrives. Several factors come into play when that will be: the end of the winter season, flattening or increasing oil price development, run-down of stocks or economic changes in key consuming regions. 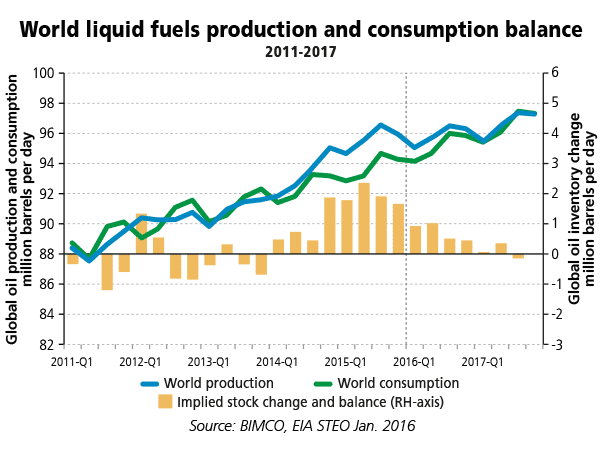 In the shorter-term, the oil market’s producers/refiners are being affected by the exceptionally warm winter currently impacting heating oil demand across the Northern Hemisphere this year. In the US, lingering effects of El Nino has resulted in an unusually warm start to the winter months. The US weather authority (NOAA) reports the demand for this “heating season” which runs from October through March, and starts in July, to be 23% lower than normal.

Despite lower demand, the refineries are still going strong due to the low price of crude oil. While vast amounts of the oil products go into stockpiles, much of it is being traded, benefitting the oil product tanker market. China’s oil product exports – consisting mainly of gasoline and diesel- grew by a whopping 53% in December reaching 4.3 million tons. Looking at 2015 as a whole, China exported more than 36 million tons of oil products, equivalent to an increase of 22% compared to 2014. The export’s growth originate from overcapacity in the refinery market as well as permissions given to independent domestic “teapot” refiners to export more oil products. This permission is extended into 2016. 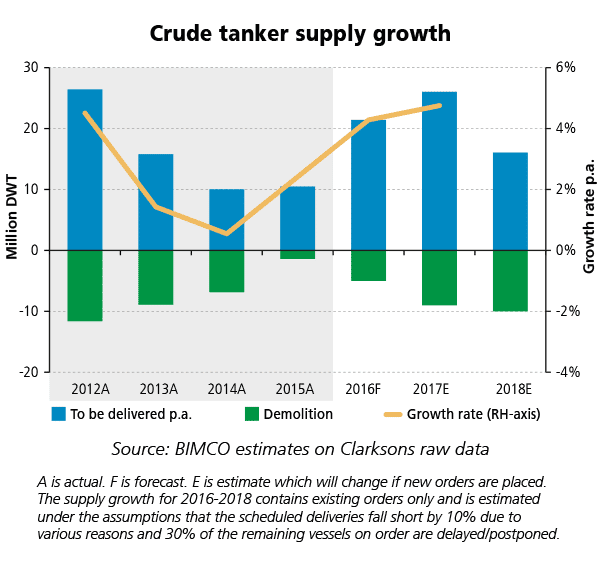 Fewer new ships have been ordered over the last few years and this has played an important role in creating the current ‘positive’ market. During the final four months of 2015, this trend ended and new orders were placed twice as fast, and the total for the year ended at 11.4 million DWT. All sizes got a fair share.

For the crude oil tanker segment, the newbuilding market was busy throughout the year. 35 million DWT was ordered, out of which 66 were VLCCs. But most significant was the sudden return of interest in aframax crude carriers. Following a decline in the aframax crude oil tanker fleet from 2013, no less than 57 new orders were placed in 2015. This was the highest number of aframax crude oil tanker orders since 2006- when 101 were ordered. 2016 marks the end of a multi-year slowdown in fleet growth for crude oil tankers. This slowdown made a freight market recovery possible as it coincided with an increase in tanker demand starting in mid-2014 when oil prices started to drop and inventories started building. Supply growth peaked at 6.5% in 2011 and slid to 0.5% in 2014. BIMCO expects the crude oil tanker fleet to grow strongly in 2016. As demolition activity is likely to stay subdued, the fleet is estimated to grow by 5.9%. Most of the new tankers will be delivered in the second half of 2016.

BIMCO expects to see prudent owners and operators starting to fix on long-term charters as the 3-year time charter freight rate for a modern VLCC has reached USD 44,000 per day and the 1-year time charter rate stand at USD 58,250 per day.

Considering that these are the best time charter rates since the crisis and the freight market for crude oil tankers is expected to soften sometime during 2016, the current market presents an opportunity for some, to secure solid revenue and earnings streams for a fixed amount of time.

The spot market may be very tempting at USD 100,000 per day, but the strong time charter market may be the window some owners and operators are looking out for to change their strategy for the coming year’s deployment mix of their fleets. 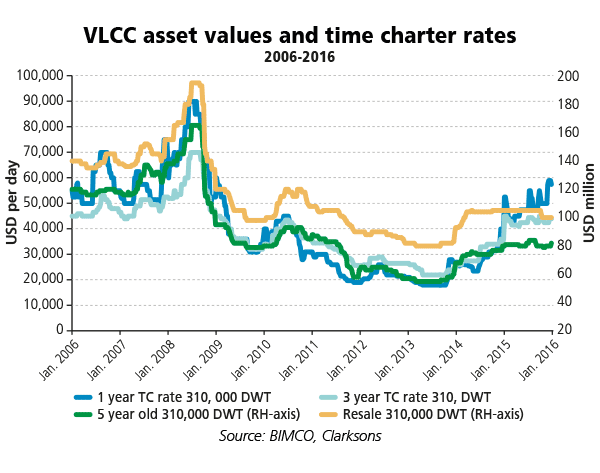 Moving further into the winter months of 2016, the tanker markets are expected to remain strong for the time being. However, with a substantial quantity of crude oil pouring into stockpiles around the world, there is a limit to how long this trend can continue. As stocks fill and the end of winter causes reduced demand for crude oil, oil shipments cannot continue to grow the way they did in 2015 and the tanker markets will feel the effect.

The International Energy Agency (IEA) expects the demand for crude oil to grow by 1.2 million bbl. a day in 2016. Despite this being a significant increase for the year, growth in 2015 was substantially higher at 1.8 million bbl. a day.

After 40 years of banning exports of crude oil, the US lifted the ban in December. The effect it will have on shipping in the coming months will be minimal as the market is overly saturated with oil as it is. Additionally, Iran’s expected increase of oil exports in coming months, following the suspension of sanctions, is also expected to have a fairly neutral impact on the tanker market – albeit some trade patterns may change.

The much-anticipated structural shift in the Chinese economy – away from heavy industry, housing, infrastructure and exports towards a domestic consumer-driven economy – is so far not hindering net oil demand, as consumption of oil products has merely shifted.