Eight people on board the commercial fishing charter vessel Francie died, and three survived when it capsized and foundered in rough conditions on the Kaipara Harbour Bar in November 2016. Chief Investigator Captain Tim Burfoot says the Transport Accident Investigation Commission found that conditions at the time of the accident were predictably unsuitable when the Francie, with the skipper and 10 passengers on board, attempted to cross the bar. 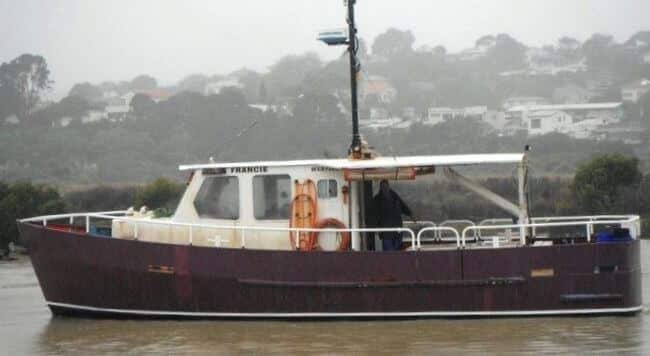 “The waves were high, steep, and breaking in several directions, and one of them struck the Francie from behind, causing it to roll heavily and capsize,” said Capt. Burfoot. “It’s very likely that only three of the eleven on board were wearing lifejackets at the time, and no-one was wearing a lifejacket provided on board in accordance with the Maritime Rules. “It’s virtually certain that they would all have had a better chance of survival had they all worn lifejackets. They would have had an even better chance if their lifejackets had been fitted with crotch straps to prevent riding up,” said Capt. Burfoot.

The Commission has recommended that commercial restricted-limit vessels should carry lifejackets that suit the vessels place and type of operation, rather than just how far out it can go. Also, crotch straps should be fitted to lifejackets on commercial vessels that operate out of bar harbours and off exposed coastlines; and recreational boat users should be encouraged to fit crotch straps to their lifejackets.

Another key lesson noted by the Commission is that skippers should always exercise extreme caution when crossing bars because sea conditions can change for the worse in a very short time.

“The Commission found indications that the skipper of the Francie had a propensity to accept a high level of risk when deciding whether to cross the Kaipara Harbour Bar; others in the industry and community knew this, but it wasn’t reported to authorities,” said Capt. Burfoot.

The Commission recommended that Maritime NZ set up and advertise a way for the public and the maritime community to report on maritime-safety-related concerns.

The Transport Accident Investigation Commission determines the circumstances and causes of transport accidents and incidents with a view to avoiding similar occurrences in the future, not to ascribe blame.