Mr. Lim, a former WMU graduate himself who is now also WMU Chancellor, said Sweden had been a strong and loyal supporter of the World Maritime University since it was founded in 1983.

“I look forward to ongoing cooperation with Sweden as we continue to further strengthen WMU’s academic offerings and research capabilities,” Mr. Lim said.

Ms. Johansson was at WMU to renew the procedural agreement between the host country and WMU, which was established to provide high-quality training for the global maritime community, with a focus on capacity-building for developing countries. 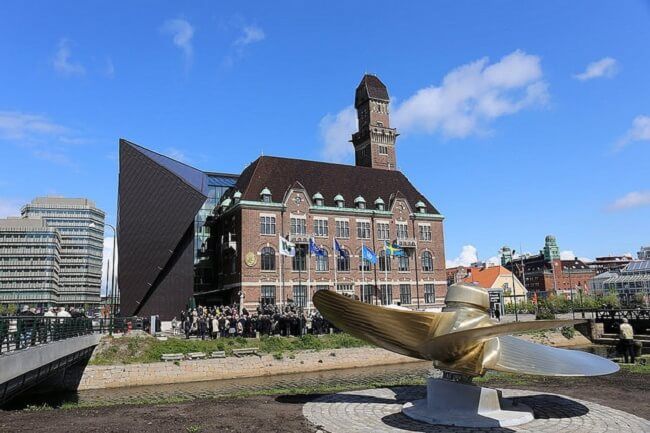 Following the meeting with Mr. Lim and WMU President Dr. Cleopatra Doumbia-Henry, Ms. Johansson addressed the students, faculty and staff of WMU. She said that in attending the IMO Assembly at the end of 2015, she had met many IMO delegates who were alumni of WMU with incredible knowledge and positive memories of their time in Sweden.

“Sweden has had the privilege of hosting WMU for over 30 years and the reasons Sweden hosts the University are very easy to understand. As an export-oriented country, shipping is vital to our industries and requires good relations with all countries. Sweden is proud to have hosted graduates from so many countries who are now holding important positions in maritime and other sectors,” she said. In addition, with reference to the 2030 Agenda for Development, she highlighted the importance and role WMU could play in the achievement of a number of the Sustainable Development Goals and in preserving and improving the health and use of the oceans.

Mr. Lim also took the opportunity to meet senior staff members and address the WMU faculty and staff. He highlighted his years as a student at WMU from 1989-1991 and emphasized how invaluable he has found the WMU global network of alumni throughout his career.

He stated his intention to support the important capacity-building mission of the University and to promote the financial sustainability of WMU.

Mr. Lim also addressed the M.Sc. students in the class of 2016 as well as many of the full-time Ph.D. students, highlighting the value of his WMU education to his ultimate career path and noting a sense of responsibility as the first WMU graduate to hold the office of IMO Secretary-General, stating that he was the first of many to come.

Mr. Lim encouraged the students to have a dream for their future, and to take a step-by-step approach to make that dream come true. He highlighted the World Maritime Day theme for 2016, “Shipping: Indispensable to the World” and encouraged students to remain humble as they assume the top management roles in the vitally important maritime industry.

“We are living in a competitive society and being humble is a high-level strategy for success,” he said.

Mr. Lim also met Mrs. Katrin Stjernfeldt Jammeh, Mayor of Malmö, and Mr. Kent Anderson, Chairman of Malmö City Council and ex-officio representative of the Municipality to the WMU Board of Governors.

Photos of the WMU visit can be found here.

The World Maritime University (WMU) in Malmö, Sweden is a postgraduate maritime university founded by IMO, a specialized agency of the United Nations.  The Swedish Ministry of Education and Research has recognized WMU as having the authority to grant degrees in Sweden and the WMU’s Master of Science and Doctor of Philosophy programmes in Maritime Affairs have been unconditionally accredited by the Central Evaluation and Accreditation Agency of Hanover*.

Established by an IMO in 1983, the aim of WMU is to further enhance the objectives and goals of IMO by providing higher education for the IMO member states around the world. Its mission is to “be the World Centre of excellence in postgraduate maritime education, training, and research, while building global capacity and sustainable development”. With more than 4,100 graduates from 166 countries WMU is truly an organization by and for the international maritime community.

The University operates on the basis of a Charter adopted by the IMO Assembly, and is accountable to the IMO Council and the Assembly. The IMO Secretary-General is ex-officio its Chancellor. WMU is governed by a Board of Governors and an Executive Board composed of representatives of different governmental, industry, labour and educational bodies. The University presents its annual report and budget to the IMO Council and also reports to the biennial session of the IMO Assembly. WMU, since its establishment, receives the status, privileges and immunities of a UN institution in Sweden.

In addition to the financial support provided by the Government of Sweden, the University benefits from significant in-kind support provided, since its establishment, by the Municipality of Malmö. The City of Malmö provides and maintains the academic premises of WMU free of charge and the residence for the students on payment of very modest rent.