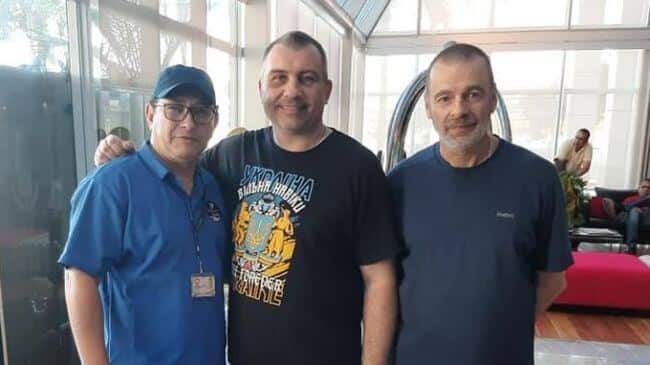 Three hospitalised seafarers, who were supported by Sailors’ Society following the death of two of their crewmates off the coast of Brazil, have returned home to Eastern Europe.

The tragic incident on July 17 was believed to be a poison gas leak while the crew were cleaning the pipeline on the MV AP Dubrava.

Croatians Gjusti Jerinic and Mirko Seman, along with Ukrainian Oleksandr Maphenko, were all hospitalised after the incident.

Sailors’ Society’s chaplain in Vitoria, Ailton De Souza, visited the men in hospital, offering them emotional support and acting as an interpreter. He said they were suffering both with their physical health and the trauma of losing their friends.

Ailton said: “One of the men said they probably will take the sad memories of the difficult time they had here in Brazil, but they will never forget about we have done for them.”

Gjusti told Ailton he was hospitalised after collapsing at the scene.

“He said that on seeing his colleagues dead he was in shock and started to feel strong pain in his chest and dizziness.”

Ailton provided Gjusti with a SIM card so that he could speak to his family.

“They sent plenty of messages to him as soon as they saw him online,” said Ailton.

“It was the first time he could speak with them since the accident happened. I could see tears come from his eyes while he was expressing his gratitude for the support we have given to him.”

Ailton has also visited the remaining crew on board the ship and took them sight-seeing to take their minds off the trauma.

Ailton is one of Sailors’ Society’s chaplains who are specially trained to offer emergency crisis support to seafarers following trauma at sea.

Sailors’ Society’s Appeals Industry To Get On Board With Wellness To Stop A Mental Health Disaster
Free Wellness Campaign Launched For Seafarers, Their Families And Shore Staff By Sailors’ Society
Santa Of The Sea Delivers Christmas To Cruise Workers Locked Down At Sea