Leading global towage operator Svitzer has highlighted the collaborative efforts of a number of key partners, coordinated by the Suez Canal Authority (SCA), to refloat the Ever Given, after six dramatic days of work.

Svitzer contributed to the multilateral effort to free the vessel with two tugs and four full crews operating in shifts, spanning some 20 people. Svitzer’s two vessels added to the total 13 tugs assisting in the salvage operation, alongside two dredgers.

For Svitzer, work began on the morning of Tuesday 23rd March, when its tugs were called to the location of the grounded boxship, some 10 hours of steaming from the company’s base in Port Said. As soon as the tugs arrived on location, Svitzer engaged with the salvage operation and were deployed at the aft port side, where they pushed to free the vessel for around four hours. Svitzer’s crews were specifically tasked with pushing at this critical part of the vessel because of support provided to the SCA during two previous groundings. 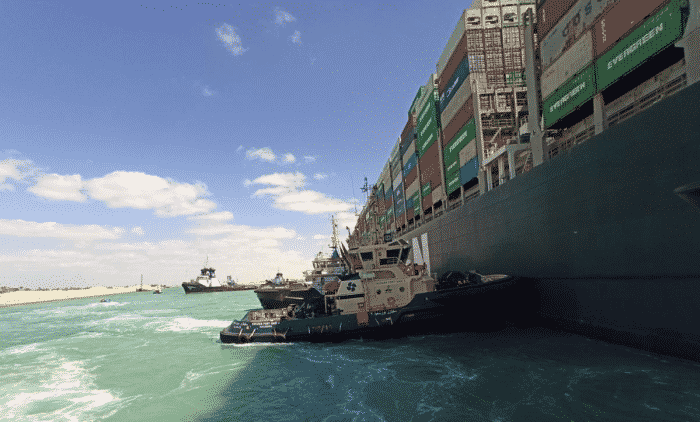 Once it became apparent that more work would be needed to free Ever Given, from Wednesday 24th through to the early hours of Monday 29th Svitzer continued to provide support by pushing the vessel and assisting with refloating trials.

Now that the vessel has been freed, Port Said 2 is escorting Ever Given back to the Bitter Lakes. Meanwhile, Port Said 1 is towing one of the dredgers that freed Ever Given to the south of the Canal.

Commenting on the support provided by the organisation, Kasper Nilaus, CEO, Svitzer said: “After six challenging and nerve-wracking days, and with the eyes of the world on all of us, we are extraordinarily proud of the relentless work that our crews onboard Port Said 1 and 2 have done to expedite the refloating of the Ever Given. At Svitzer, doing difficult things in difficult places is in our DNA, but, even so, this has been one of the more spectacular and difficult tasks we have faced as global towage operator.

“The outstanding project management and orchestration of the SCA has been instrumental to solving this situation in a quick and safe fashion. We would like to thank our crew, the SCA, and all other parties involved in this spectacular salvage operation in the Suez.”

The unique circumstances of Ever Given’s grounding made the rescue operation a highly complex task. Svitzer has highlighted the exceptional coordination, partnership and collaboration from SCA and all other involved parties that ultimately managed to refloat the vessel sooner than expected. Since the initial callout nearly a week ago, it has been Svitzer’s key priority to provide all support possible to the SCA and all other partners.

Agreement Reached On Ever Given Ship Stuck In Suez Canal, Could Be Released Soon

Ikea, Lenovo Cargo Worth About $780 Million Still Trapped On MV Ever Given In Suez Canal
Ever Given’s Insurers Blame Suez Canal For Controlling Ship’s Speed Before Grounding