Demolition of containerships almost tripled in the first five months of 2016 in comparison to the same period of 2015. This illustrates the efforts carried out by shipowners to counter the fundamental imbalance between supply and demand under poor container shipping market conditions. However, more needs to be done to lift the charter market.

The demolition of capacity in the panamax segment (3-5,999 TEUs), since the start of January 2016 till the year to date, has been especially significant. A total of 150,863 TEUs of panamax ships have been demolished so far in 2016, this equals the number of the same type of ship scrapped from June 2014 up to and including December 2015. 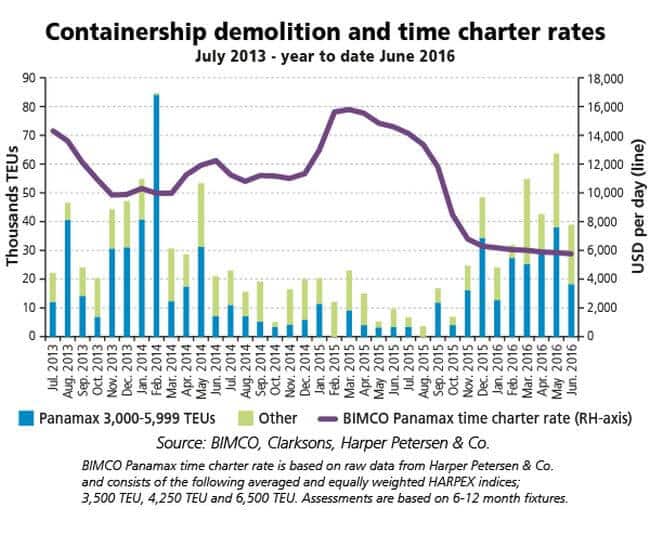 One possible explanation behind the higher demolition in the panamax segment since January 2016 is their potential redundancy – due to the opening of the new locks of the Panama Canal on 26 June 2016. This will soon allow neo-panamax containerships with a maximum beam of 49m to pass through. The new set of locks was inaugurated by COSCO Shipping Panama a ship with a capacity of 9,443 TEUs. More and larger ships are set to enter, as the new locks begin to operate with full capacity.

Given the stubborn growth of global demand, increased scrapping is the way to diminish the gap between supply and demand in the containership market. BIMCO is therefore raising its forecast for containership demolition from 250,000 TEUs to 400,000 TEUs for the whole of 2016”.

Peter Sand adds: “As the global demand for containerships in 2016 is not expected to grow at the pace needed to match excess containership capacity, it is challenging for time charter rates to improve. Going forward, multiple years of low fleet growth – in the form of demolition and low contracting activity – will then improve the market.

The expansion of the Panama Canal backs up the shift away from the segment of panamax ships which have a maximum beam of 32 metres, putting them in line for demolition”.