HHIC-Phil’s Subic Shipyard made history again in the world’s shipbuilding industry by holding a naming ceremony for five vessels at the same time.

HHIC-Phil’s Subic Shipyard finally held a naming ceremony for five vessels at the same time for the second time in the world and for the first time in the Philippines. 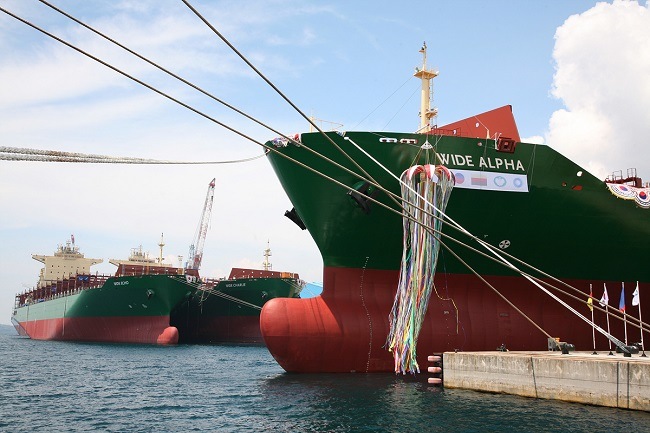 The naming ceremony was held with the attendance of nearly 200 related officials and investors including Ahn Jin-gyu, President of Subic Shipyard, and Andrea Cramer, Vice President of Oaktree. At the ceremony, President Ahn said, “We are very pleased to go with renowned investors such as Oaktree.” He added, “We are going to keep moving forward to enhance our competence and maximize customer satisfaction with high-tech, environment-friendly vessels”.

HHIC-Phil’s Subic Shipyard is a large-scale shipyard built in the Subic Free Economic Zone (3,000,000㎡) in the Philippines in 2009. It has strengthened its ground as a leading exporter since its establishment through promotion of related industries, job creation and contribution to a local society.

In particular, it entered the world’s top 10 for the first time last month, displaying a sharp growth. This year, it has already won the bids to build 300,000TEU Very Large Crude Carriers (VLCCs) and very large container ships (more than 10,000 TEU). The global shipbuilder has already booked enough advance orders for three years of production (approx. US 3.2 billion dollars, 50 ships).

An official from HHIC-Phil’s Subic Shipyard said, “Subic Shipyard targets to leap into the world’s leading shipbuilder by maximizing the efficiency of its production system through the establishment of a systematic two-track system which means that Subic Shipyard specializes in the production of large vessels and offshore plants while Yeongdo Dockyard focuses on mid-size and special-purpose vessels”.

ABS Classes First Offshore Vessel In GOM To Use Hybrid Power
Want to share your tips and advice? Got questions? Visit the community forum to ask questions, get answers, meet people, and share your tips!