You are here: Home › Shipping News › Study: US Coastal Military Installations At Risk of Submergence Due to Climate Change
TwitterFacebookLinkedInPinterestBuffer

The analysis, “The US Military on the Front Lines of Rising Seas,” found that coastal installations will experience more extensive tidal flooding and when hurricanes strike, deeper and more extensive storm surge flooding. 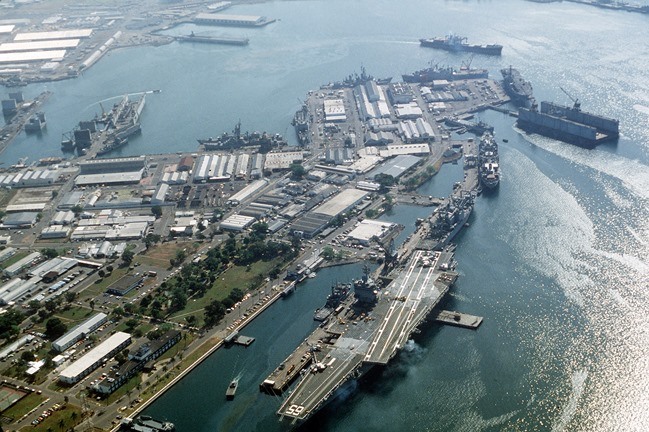 “We’re now at the front end of the changes that will occur, with some installations already dealing with flooding during extreme high tides,” said Erika Spanger-Siegfried, lead author of the report and senior analyst in the Climate and Energy program at UCS. “Depending on how fast sea level rises in the second half of this century, tidal flooding will become a daily occurrence in some areas; that is, those places become part of the tidal zone as opposed to useable land. This also depends on how installations respond and whether they have the resources to adapt.”

The UCS study analyzed 18 East and Gulf Coast military installations—selected to be representative of coastal installations nationwide in terms of size, geographic distribution and military branch—for their changing exposure to flooding through the end of the century. National Oceanic and Atmospheric Administration (NOAA) tide gauges from Portland, Maine to Pensacola, Florida were used to calculate the “intermediate” and “highest” sea level rise projections and the frequency of high tide flooding, and the NOAA SLOSH model was used to model storm surge. Recent studies suggest that the highest scenario is increasingly plausible due to accelerating ice sheet loss.

“By 2050, most of these sites will see more than 10 times the number of floods they experience today,” said Kristy Dahl, UCS consulting scientist and report co-author, who served as the lead analyst for the study. “In 2070, all but a few are projected to see flooding once or twice every day. Shockingly, these aren’t even the worst-case scenarios.”

Because of factors such as low elevation, land subsidence and differing rates of sea level rise, some military installations will be forced to address increased flooding and land loss risk sooner than others. For example, with the faster pace of ice sheet loss, four installations—Naval Air Station Key West in Florida, Joint Base Langley-Eustis and Dam Neck Annex in Virginia, and Marine Corps Recruit Depot on Parris Island in South Carolina—could lose between 75 and 95 percent of their land this century.

“Many of the installations we looked at can expect to lose a great deal of their land to the future high tide line,” said Astrid Caldas, report author and UCS climate scientist. “And when a hurricane strikes, the flooding is projected to be substantially deeper at many sites. Flooding obviously won’t be confined to the installations. The surrounding communities, which the installations are pretty connected to, will be dealing with the same—and sometimes worse—flooding problems.”

Some military installations are already taking actions to adapt to sea level rise. At Langley Air Force Base in Virginia, a shoreline seawall and door dams have been constructed to protect some of its buildings. The base also has a pump system to remove flood waters that get past the safeguards. Similarly, the Dam Neck Annex in Virginia has built a rock-core dune that is about one-mile long to protect the main part of the installation from storm surge.

“The Pentagon knows it has a problem, and some installations are already making an effort to reduce their exposure,” said Spanger-Siegfried. “But there’s a big gap between what’s being done and what’s needed. Meanwhile, Congress may make it harder. The House voted last month to block the Defense Department from spending money to implement its own climate change preparedness plan.”

Going forward, individual installations need more detailed analyses of how rising seas will affect their infrastructure, as well as additional resources to adapt to the changing conditions, according to the report. Congress and the Department of Defense should, for example, support the development and distribution of high-resolution hurricane and coastal flooding models, adequately fund data monitoring systems like NOAA’s tide gauge network, and allocate resources to support detailed mapping that reflects future sea levels as well as planning and adaptation efforts.

Additionally, military installations will need to engage in regional planning processes with surrounding communities given that rising seas will affect housing, transportation systems and critical infrastructure both on and off installations.