You are here: Home › Shipping News › Stranded Crew Living On The Mercy Of Charities For 32 Months
TwitterFacebookLinkedInPinterestBuffer

A group of 5 seafarers is facing dire conditions as they are not able to deboard an abandoned vessel for 4 years.

The crew of MT Iba, an oil tanker is stuck mid-sea. 4 years into the ship’s journey, the vessel was abandoned by its owners and stranded close to the shore. Such is the condition of these hapless seafarers that they can see land but can’t go there. Somewhat like the Christopher Nolan movie Dunkirk, here too seeing home isn’t going home.

The ship was abandoned by the owner in the Gulf and from then onwards, the seafarers are guarding the 5000-tonne vessel in torn clothes without much food. 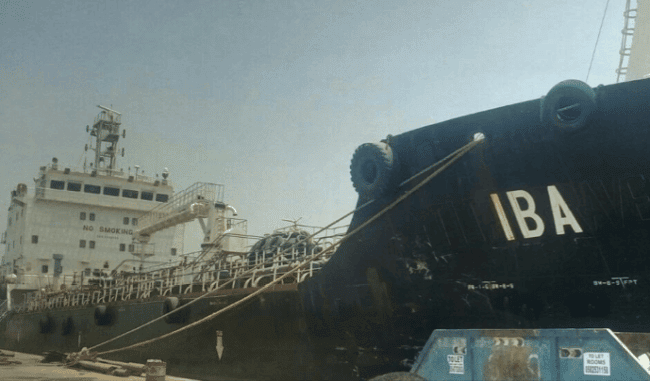 All was going well, till the shipping company stopped paying their wages on account of financial loss. Alco Shipping, the firm handling MT Iba hasn’t cleared the seafarers’ wages for the last 32 months, making them live in dire conditions.

The seafarers contacted different charities and social organizations to stay afloat. They survived on donated food and medical supplies given by charitable organizations.

In late January this year, the abandoned tanker ran aground in one of UAE’s 7 Emirates, Umm Al Quwain. Apparently, a rough sea cut off the anchors of the ship, driving it ashore.

One of the seafarers of MT Iba, Vinay Kumar who hails from India said that they are living in hell, begging for food and treated like slaves.

The situation is even more complicated for some of them as their passport is about to expire. The Myanmarese engineer Nay Win who works on the ship can’t be in the Gulf as his passport has expired. Myanmar’s current political condition puts a question mark on the renewal of the passport.

Pakistani Engineer Riasat Ali calls it a jail where they are neither paid nor allowed to go home.

So far the shipping company hasn’t responded to the allegations

A charity organization, The Mission to Seafarers has been taking care of seafarers by monitoring their well being and providing them food and medical aid.

The shipping company has to clear a lump sum of $230,000 as of the collective wages of the crew, revealed Andy Bowerman the director of The Mission to Seafarers.

The organization is mediating the negotiations between the stranded seafarers and the shipping company.

Only recently the company has agreed to pay $150,000 of the due wages. However, the seafarers haven’t responded to it yet. It’s unclear if they will accept the pay cut.

So far there isn’t a way out for the sailors as they have to remain in the ship if they don’t agree to payment. The ship is the sole medium of leveraging through this. Also, maritime laws will hold them responsible for abandonment if they leave the vessel. The seafarers can be detained in a such scenario.

Pragmatic Forwarders Make Container Weighing Work
Want to share your tips and advice? Got questions? Visit the community forum to ask questions, get answers, meet people, and share your tips!