The chemical and product tanker Stenaweco Impulse was last Monday named at Langelinie Pier in the centre of Copenhagen in a solemn ceremony attended by guests from near and far. H.R.H. Crown Princess Mary of Denmark was a proud godmother who, as tradition dictates, broke a bottle of champagne against the tanker’s bows and wished the vessel, her captain and his crew fortune and prosperity on the seven seas. 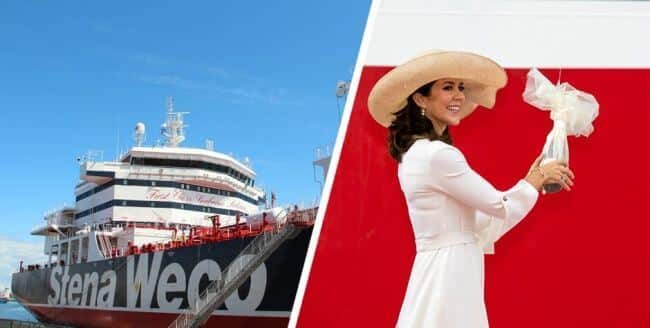 The 300 guests had travelled to Copenhagen from many different countries in order to attend the ceremony. Afterwards, they were all given the opportunity, together with H.R.H. Crown Princess Mary, to take a tour of the new vessel – from the bridge and all the way down to the engine-room.

”We are very proud of our IMOIIMAX fleet with six vessels delivered so far. The concept, with its innovative design, has already proved to be very successful, as has the operative collaboration with Weco Shipping, which was formed five years ago”, says Erik Hånell, President and CEO of Stena Bulk and CEO of Stena Weco.

“The Stenweco Impulse, has given our collaboration with Stena Bulk a new dimension as we now also have a jointly owned vessel. I am, naturally, extra proud that the naming ceremony took place in Copenhagen with H.R.H. Crown Princess Mary of Denmark as the godmother. We look forward to a continuing healthy and positive development of Sten Weco together with Stena Bulk”, comments a pleased Johan Wedell-Wedellsborg, chairman of Weco Shipping.

IMOIIMAX is a further development of and already well-established concept and the innovative technical design has been developed by Stena Teknik together with the Chinese shipyard GSI (Guangzhou Shipbuilding International). It offers numerous advantages such as extra large cargo flexibility, a high level of safety and economical fuel consumption – 10-20% lower than that of equivalent vessels when sailing at service speed.

The Stena Impression, Stena Image, Stena Imperial and Stena Important were delivered in 2015 and the Stena Imperative in January 2016. The remaining six vessels, after Stenaweco Impulse will be delivered every third month and the last vessel in 2018. Three of the 13 IMOIIMAX tankers are wholly owned by Stena Bulk, six together with GAR (Golden Agri Resources), two by Stena Bulk’s sister company Concordia Maritime and two by Stena Weco.