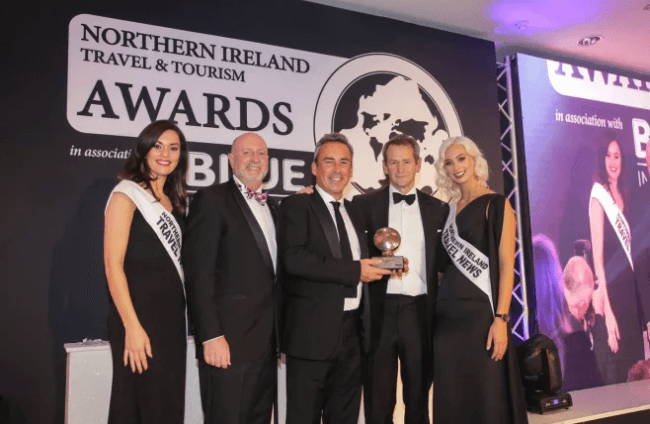 Northern Ireland Travel News has organised these prestigious awards for the past 26 years and this year’s ceremony was hosted by BBC’s Pointless presenter Alexander Armstrong. The ceremony was attended by more than 430 guests and travel industry VIPs from all over the UK and Ireland.

Almost 30 awards were presented on the night, decided by votes from the travelling public, the travel trade, and by travel and tourism industry leaders.

Orla Noonan, Stena Line’s Travel Commercial Manager (ISN) said: “It’s an honour for Stena Line to receive this prestigious award coming as it does from our peers across the travel industry.

“Although this is our 25th consecutive year of winning the award we take absolutely nothing for granted and realise that each year we have to work even harder to provide our customers with a service which really is ‘award winning’.

“Whilst the travel industry is constantly changing and reinventing itself in an increasingly digital world, putting the needs of the customer first, every time, still remains the key objective for our business success, “added Orla.
Stena Line is the largest ferry operator on the Irish Sea, offering the biggest fleet and the widest choice of routes between Ireland to Britain including Belfast to Liverpool and Heysham, Belfast to Cairnryan, Dublin to Holyhead and Rosslare to Fishguard routes, a total of 228 weekly sailing options between Ireland and Britain.