Ferry company Stena Line plans to start operating two fossil-free battery-powered vessels on the route between Gothenburg and Frederikshavn in Denmark no later than 2030. This was announced by Stena Lines CEO Niclas Mårtensson during a press conference about the industry collaboration project Tranzero Initiative, in Gothenburg on Thursday 4 February.

In an effort to speed up the transition to fossil-free fuels in the transport sector, Stena Line together with Volvo Group, Scania, and the Port of Gothenburg have joined forces in the Tranzero Initiative collaboration project to bring about a significant reduction in carbon emissions linked to the largest port in the Scandinavia. The aim is to cut emissions by 70 percent by 2030 in the Port of Gothenburg.

During a press conference about the Tranzero Initiative on Thursday 4 February, Stena Line CEO Niclas Mårtensson announced the company´s plans to launch two fossil-free vessels on the Gothenburg-Frederikshavn route before 2030. 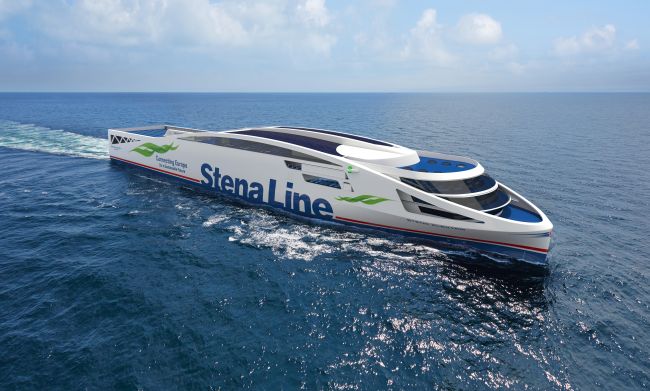 “We now move from vision to vessel with the battery-powered vessel Stena Elektra. Within a year we will present the outline specifications and at the latest by 2025 we plan to order the first vessel. This will be a huge step towards fossil free shipping”, said Niclas Mårtensson, CEO Stena Line Group and member of the Swedish Government Electrification Commission.

Stena Elektra will be the world’s first fossil free RoPax vessel of its size and will measure approximately 200 metres and combine a passenger capacity of 1000 with 3000 lane metres freight capacity. The vessel will be built in high tensile steel to lower the weight and increase efficiency and it is estimated the vessel will run on battery power for approximately 50 nautical miles, the distance between Gothenburg and Frederikshavn.

The battery capacity will need to be approximately 60-70 MWh and the vessel will be charged in port. Stena Line also looking into combining the electrification with other alternative fossil free fuels such as fuel cells, hydrogen and bio methanol for longer reach of the vessels.

”The electrification of shipping has only just began. We see a great potential for both battery hybrids and battery powered vessels on several of our short-sea shipping routes in the future. But, it takes more than the electrical ships, we also need to develop the infrastructure and charging possibilities in the ports and terminals in the same pace and that is a reason why collaborations projects like this are so important, said Niclas Mårtensson, CEO Stena Line.