From 2019, the ships powered by liquefied natural gas are to be operated by Siem Car Carriers AS under charter adults to Volkswagen Group Logistics. Significant reduction in atmospheric pollutants such as CO2, NOX, particulates and sulfur oxides.Sustainable transport of vehicles from Europe to North America. 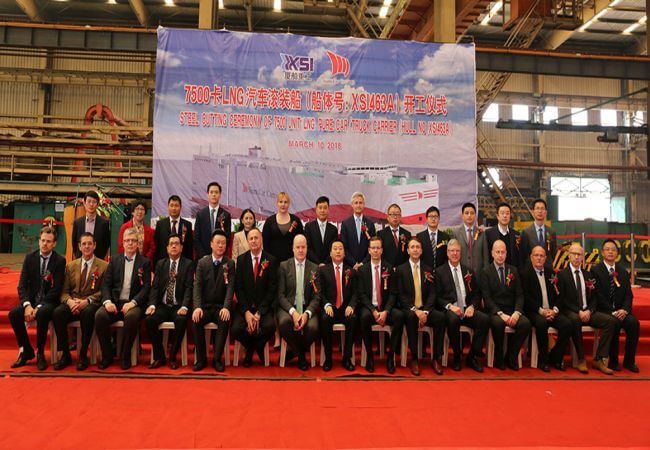 After a few months of preparation, the stage has finally been reached: work has started on the construction of LNG vessels for logistics within the Volkswagen Group. Volkswagen Group Logistics, the operator Siem Car Carriers and the shipyard Xiamen Shipbuilding cele-brated the “steel cutting” (equivalent to foundation laying in the shipbuilding industry) with an official ceremony in the Chinese city of Xiamen. From 2019, the two ships powered by liquefied natural gas will carry Volkswagen Group vehicles from Europe to North America. LNG drive systems will significantly reduce the atmospheric pollutants emitted by the ships.

Markus Lange, Head of Vehicle Logistics of Volkswagen Group Logistics, attended the steel cutting ceremony in Xiamen and said: “Greater sustainability in logistics is a key issue for us. The use of two LNG ships for transporting vehicles is a major step forward which we can only take together with our strong partners.

Over the coming months, the shipyard, Xiamen Shipbuilding Industry, will build two LNG ships which will then be operated by Siem Car Carriers and chartered by Volkswagen Group Logistics. The engines for the ships will be supplied by MAN Diesel & Turbo.

Compared with conventional vessels, the LNG ships will reduce CO2 (carbon dioxide) emissions by up to 25 percent, NOX (nitrogen oxides) by up to 30 percent, particulates by up to 60 percent and sulfur oxides by as much as 100 percent.