Statkraft and Skagerak Energi have been chosen as suppliers of green hydrogen to the zero-emission ship planned by HeidelbergCement and Felleskjøpet. The winning concept involves container swapping with compressed hydrogen. The solution is flexible and can be used both for transport and other purposes.

Through the Green Shipping Program, HeidelbergCement and Felleskjøpet announced a tender to supply green hydrogen for a zero-emission bulkship. The ship will transport grain from Eastern Norway to Western Norway and rock/gravel on its way back and will be operated using emission-free green hydrogen in the combination with rotor sails.

Earlier this spring, the parties chose Egil Ulvan Rederi AS as their shipping company and have now awarded Statkraft and Skagerak Energi the contract for delivery of green hydrogen in competition with more than ten suppliers. 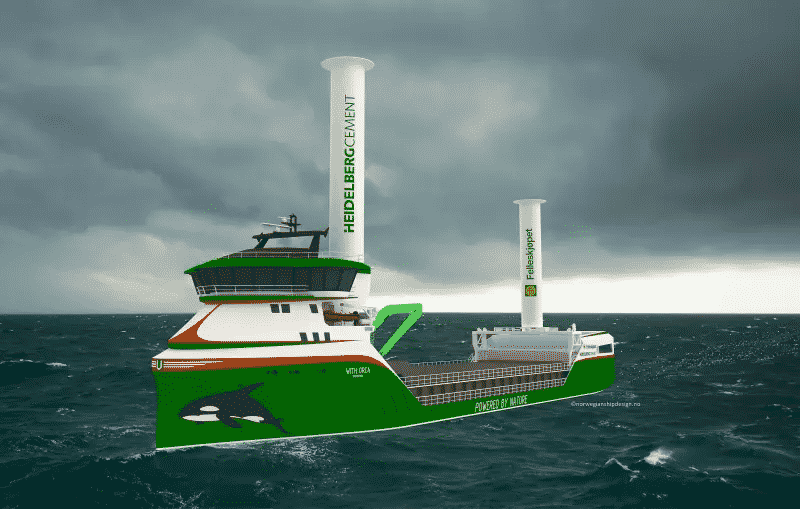 “Statkraft is Europe’s largest producer of renewable power, and the production of renewable hydrogen and hydrogen-based fuels is in line with our strategic ambitions. This contract is an important milestone in our efforts to establish Statkraft as a leading hydrogen producer in Norway and Sweden and fits well with the series of other initiatives we have on hydrogen for sea and land transport,” says Birgitte Ringstad Vartdal, Executive Vice President at Statkraft.

“This is fully in line with our new growth strategy and an important milestone for us. We are proud to be chosen as the supplier together with Statkraft,” says CEO Jens Bjørn Staff at Skagerak Energi.

“In the process of creating the world’s first zero-emissions bulk ship, we’re happy to have signed with two solid partners in Statkraft and Skagerak Energi as energy suppliers. Statkraft and Skagerak Energi are companies we trust, and that we know have strong standings in the energy market. Their concept of hydrogen production in both the west and eastern part of Norway gives us operational advantage when the ship is seaborn, and the usage of hydrogen gives us knowledge that can be transferred to other ships and segments in the future. The „Greenbulk“-project is without doubt ground-breaking for the energy sector and we look forward to collaborating with them,” says Svenn Ivar Fure, CEO, Felleskjøpet Agri, and Knut Omreng, Director of Logistics, HeidelbergCement Northern Europe in a joint statement.

The Norwegian Government has recently presented its roadmap for hydrogen. The roadmap includes concrete ambitions to establish five hydrogen hubs within maritime transport that also accommodate for suppling land transport. Establishing hydrogen production for this freight route in the Oslofjord area can form the basis for such a hub.

Statkraft and Skagerak Energi will now continue to work together with the Green Shipping Programme /DNV, HeidelbergCement, Felleskjøpet and the shipping company Ulvan/Norwegian Ship Design to detail the concept and choose the location of the facility. The plan is to be ready for an investment decision by summer of 2022 in order to start deliveries late 2023.