In tsunami preparedness, it turns out there can be strength in beauty. Rows of green hills strategically arranged along coastlines can help to fend off destruction from tsunamis while preserving ocean views and access to the shore. For some communities, they may offer a better option than towering seawalls.

Those are the findings of a peer-reviewed paper by a team of researchers who have tried to quantify how tsunami waves of different heights interact with mounds of various sizes and shapes arranged near the water’s edge. The research was published on May 4 in the journal Proceedings of the National Academy of Sciences. 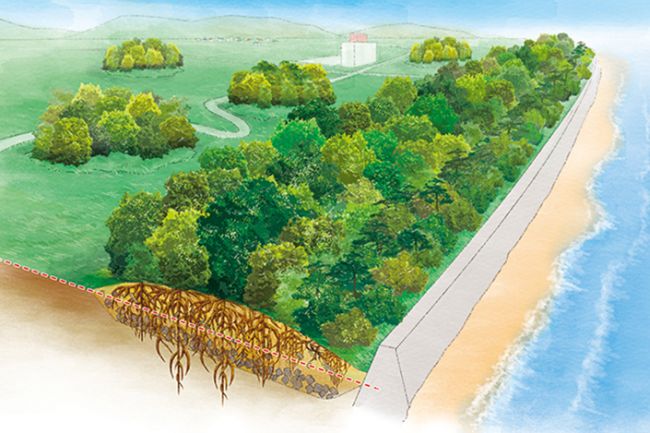 Giant seawalls are the conventional approach to mitigating tsunami risk. Japan, for example, has built hundreds of miles of concrete walls, taller than 40 feet in some places, at a cost of more than $12 billion since tsunami waves crashed through seawalls and flattened coastal communities throughout eastern Japan in March 2011.

But seawalls tend to be expensive to build, tough on local tourism and fishing industries, disruptive to coastal communities and environmentally destructive – and failures can be catastrophic, said senior study author Jenny Suckale, an assistant professor of geophysics in the School of Earth, Energy & Environmental Sciences (Stanford Earth).

“If the wall collapses, the consequences are life shattering,” said Suckale, whose collaborators on the study include scientists from the Naval Postgraduate School, the New Jersey Institute of Technology, MIT and Indonesia’s Ministry of Marine Affairs and Fisheries. Seawalls can not only create a false sense of security that can discourage swift evacuations, she explained, they can also end up breaking apart into blocks of rubble that tsunami waves then toss throughout a city.

“It’s sort of intuitive that the moment you see it as a threat, you build a wall,” Suckale said. But while it’s true that seawalls can address some tsunami risks, the factors that make a place livable can be far more complicated. “Most coastal communities want to maximize their well-being, not minimize their risk at the expense of everything else,” she said. “Do you really want to live behind a huge concrete wall because there is a small chance that a big tsunami will hit you? Let’s put more options on the table and have an informed debate.”

Having more options on the table is especially important in places where resources for coastal protections are scarce, said study co-author Abdul Muhari, who leads the coastal disaster mitigation division of the Indonesian Ministry of Marine Affairs and Fisheries. “By having the analysis in our paper, tsunami-prone countries now have a fundamental basis for evaluating hills as a less-expensive way to mitigate tsunami risks,” he said.

Coastal forests can help put the brakes on tsunami flow speeds in nearby towns and villages. These and other nature-based solutions are increasingly important in plans for coastal risk management, the researchers write. Yet it takes decades for trees to grow sturdy enough to provide meaningful protection.

And, according to the new study, vegetation has little effect on an incoming wave’s energy. Plants may still play an important role in fighting erosion, however, thereby helping to maintain the shape, height and spacing of hills that make them effective.

An alternative solution cropping up on coastlines in tsunami-prone countries around the world seeks to combine the best of both worlds: the tunability and immediacy of an engineered barrier and the coastal access and ecological function of a more porous green zone.

Until now, designs for these projects, known as tsunami mitigation parks, have been informed more by aesthetics than science. “Right now, our designs are not strategic enough,” Suckale said. “This paper is a starting point for understanding how to design these parks to derive maximum risk mitigation benefits from them.”

By numerically modeling what happens to a tsunami wave when it slams into a single row of hills, the researchers show mounds can reflect and dampen a tsunami wave’s destructive power about as well as a typical seawall can. And in the event of a huge, one-in-a-thousand-years kind of tsunami, they will fail no worse than even the most imposing walls. As a result, the study finds, there’s little extra value to be gained from combining walls and hills – a common approach in designs from Constitución, Chile to Morino, Japan.

“These hills reflect a surprising amount of wave energy for small and intermediate tsunamis,” Suckale said. Customizing the shape of the hills based on the shape of the coastline, the direction that tsunamis are likely to approach from, and other site-specific factors can help to maximize the amount of energy reflected back. This is key, Suckale said, because “energy is really your main enemy.”

That’s because if a tsunami inundates an area at full throttle with even one foot of water, Suckale said, it will leave few survivors. “It just slams everything. You can’t stay on your feet, and once you fall, it’s very dangerous. It throws cars at buildings. You’ll easily be knocked over by things carried in the water.”

The study also points to the need for homes and infrastructure to be set back behind a broad buffer zone, because hills can speed up flows and increase damage in the area immediately surrounding the park. To avoid this unintended consequence, the researchers suggest considering designs with multiple staggered rows of hills that are larger toward the shore and smaller inland.

Suckale is an Assistant Professor of Geophysics, a Center Fellow, by courtesy, at the Woods Institute for the Environment, and a member of the Institute for Computational and Mathematical Engineering (ICME) at Stanford. Co-author Adrian F. Santiago Tate is a PhD student in Geophysics. Co-author Brent Lunghino worked on the research as a graduate student in Stanford’s Institute for Computational and Mathematical Engineering. He’s now affiliated with the company ClimateAI.

Additional co-authors are affiliated with the Massachusetts Institute of Technology, the New Jersey Institute of Technology, the Naval Postgraduate School in Monterey, Calif., and the Directorate of Sustainable Utilization of Coastal Zone and Small Islands, the Directorate General of Marine Spatial Management and the Ministry of Marine Affairs and Fisheries in Jakarta, Indonesia.

The research was supported by Stanford Earth, the National Science Foundation Graduate Research Fellowship Program, and the Office of Naval Research.