In October last year, bulk carrier CS Caprice was shipping a cargo of barley across the Mediterranean when it answered a call to help about 500 people who were drifting north of Libya without a skipper. A brewing storm threatened to capsize their tiny fishing boat.

“They had no food or water and they had been three days at sea,” said the ship’s captain, Joshua Bhatt. “When they showed small infants to us, it was a really pathetic sight … They were asking, ‘can you take us to Italy?'”

Like any merchant ship, the crew of the Caprice was bound by the United Nations Convention on the Law of the Sea, to “render assistance to any person found at sea in danger of being lost.” Such rescues used to be rare. But as the number of refugees and migrants attempting to get to Europe has spiked over the past two years, it has drawn in more and more vessels like the Caprice.

Since January 2014, more than 1,000 merchant ships have helped rescue more than 65,000 people, according to estimates from the International Chamber of Shipping. That’s more than one in 10 of the estimated 585,000 migrants and refugees who crossed the Mediterranean over the period. Commercial shipping companies have been “absolutely heroic,” said Melissa Fleming, chief spokeswoman for the United Nations refugee agency.

But shipping companies are increasingly frustrated with that role. They are prepared to help, they say. But they want governments to take more of the burden. 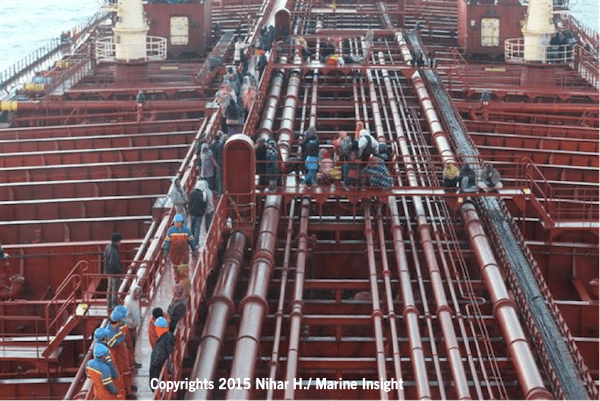 One problem is cost. Insurance covers some expenses when a ship is forced to conduct a rescue – but not the loss of business, which ranges from $10,000 per day for cargo ships to more than $50,000 for oil tankers. A more important concern is security.

“Merchant ships are being used as radio taxis to pick up people,” said Harry Hajimichael, general manager with Greek-based operator Tsakos Shipping and Trading, four of whose vessels were involved in rescuing more than 600 people in the Mediterranean last year. “This is not the right way to do it.”

For firms like the Bahamas-based Campbell Shipping, which manages the Caprice, the main worry is who they might be rescuing. “We do not know who we are taking onboard: There are no papers, there are no background checks,” said Rajesh Dhadwal, senior manager for marine and safety at the company. “What if among the people rescued, a few are part of Islamic State or a terrorist organisation, and they … take over a tanker?”

The European Union (EU) says it has responded to the concern, tripling the budget of border management agency Frontex. “We have now deployed at sea the largest operation in the history of Frontex and of the operational cooperation among the Member States at the external borders,” a spokeswoman said by email.

Since June, she said, that effort has saved over 122,000 lives. The EU is also looking to improve cooperation between national coast guards.

Even so, the shipping industry says more needs to be done. “Merchant shipping accepts that it has a role to play in this crisis,” said Peter Hinchliffe, secretary general of the International Chamber of Shipping – a trade association whose members represent over 80 percent of the world’s fleet. “But we also need support.”

The Caprice, with 27,000 tonnes of Latvian barley on board, was heading for Qatar just after lunch on Oct. 22 when the call came from Malta’s search and rescue centre. A fishing boat was in distress after its skipper had abandoned it. A strong gale was forecast but no other ship had responded to the call.

On board the Caprice, the captain checked with his company’s headquarters.

“It was off the coast of Africa and there was the Ebola situation at the time,” said Campbell Shipping’s Dhadwal. He worried that the 20 crew members on the Bahamian-registered ship could be at risk.

The company was also concerned that 500 passengers could overpower the small crew – a common fear, as the average merchant ship crew is no larger than that on the Caprice. Nonetheless, the Caprice changed course for the distressed vessel. It was named Barrakad al-hadi and had come from Egypt.

By twilight, the vessels were near enough and Bhatt, the captain, called the fishing boat on the radio: “My humble request,” he said, according to a video made by the crew. “Please come alongside … We have called for permission to take you all on board our vessel. Please understand that the weather is going to be bad.”

The fishing boat replied: “Everybody here wants to go to Italy.”

Night neared and the fishing boat kept its distance. On the video someone on the fishing boat radioed to say that if the Caprice could not take the passengers to Italy, the ship should give them food and water and let them continue on their way.

Migrants often have no idea of the risks they face, said Tsakos Shipping and Trading’s Hajimichael. “The Med is not a lake,” he said. “It has got very, very sudden weather.” Bhatt could not let the migrants sail on. “I started chasing them,” he said.

By now it was dark. Bhatt did not know if Italy would take the migrants. And it wasn’t clear where their journey would end, said Campbell Shipping’s Dhadwal. “Once you take them, there have been cases of ships bumping from port to port and countries not taking them,” he said. “Once we take them onboard – who is going to accept them? We really did not know.”

In a rescue like this, only some of the merchant ships’ risks are covered by insurance. Ship insurers – known as P&I clubs – usually cover crew injury, pollution and cargo damage.

If a refugee attacks and injures a crew member, or breaks into a container and damages cargo, or turns on a fuel pipe causing pollution, the insurance would cover the shipowner, said Jonathan Hare, General Counsel with P&I insurer Skuld.

But rescue operations also take shipping insurance into uncharted waters, said Jonathan Moss, head of transport at law firm DWF. A normal policy will not pay fines for late arrival, or help cover the cost of chartering another vessel at short notice.

Insurers are keen to point out the risk of owners breaching their safety certificates by taking on board more passengers than have been legally agreed, said Moss.

“Similar grey areas are found regarding where liability would fall if migrants should die or be injured while being rescued by a ship’s crew.”

Like all other merchant ships in this situation, the crew of the Caprice was headed into that grey area. The Italian government agreed to take the migrants, who then agreed to board the Caprice. But the swell was mounting.

“The weather report was really bad,” Bhatt said. “Force 8, Force 9 – which is not good for the boat and it would definitely have sunk with all the people.”

People were hanging off the side of the fishing boat as the Caprice came alongside, and the wind was pushing the small boat towards the ship’s massive propeller, Bhatt said. It took a couple of hours to get the passengers safely on board the bigger ship.

For merchant ships, every rescue is complex, said Hajimichael. With a purpose-built ship, you have just to walk from one boat to the other. It’s another thing climbing from a small boat onto a vessel the size of a building in the middle of a rough sea.

“These people are tired, are carrying their belongings,” he said. “Some are carrying children or their babies.”

Some of the trickiest rescues in the Mediterranean have been carried out by oil tankers. On a tanker, matches, sharp objects or even mobile phones and electronic devices can be dangerous.

“A wrong move may cause an ignition,” Hajimichael said. The only space migrants can use is crew accommodation – not the deck. “You can use the hospital medical room and you still have 200 people on board that require clothing, water and food,” Hajimichael said. “You would imagine all of them will have to use the toilet.”

The tankers that cross the Mediterranean today can carry 2 million barrels of oil. That’s more than the Exxon Valdez was carrying when it ran aground in Alaska in 1989, causing oil to spread over 350 miles of beaches.

By about 10 pm, the Caprice had counted 510 people aboard. The fishing boat was abandoned to what Bhatt said was by now a ferocious sea.

The ship only had enough lifejackets for 30 people and the cook, Hari Prasad Sharma, was confused. How could he feed hundreds of people on supplies for 20? “This is the first time I have done anything like this,” he said. The captain came up with the idea of an Indian porridge made from rice and dhal. This the crew served in batches dished out on thick sheets of paper.

As the weather mounted, the crew had to shelter the passengers in store rooms, mast houses, and crew accommodation. “The sea was roaring in, flooding the entire main deck,” Bhatt said. Half the crew worked to feed the passengers while the other half slept.

The Caprice sailed through the night and the next day. On the second day, just as it was nearing the Italian coast, one of the rescued women, a Syrian, suddenly began gasping for breath.

“We radioed for medical advice. They asked us to inject 100 mg of hydrocortisone,” Bhatt said. “Since we were at the coast we requested a chopper for an airlift as it was better to take her off. As seafarers, we cannot do much for emergencies.”

The Caprice, which had been due in Qatar on Nov. 4, instead arrived at Augusta in Sicily late on Oct. 24. The diversion took about 60 hours, but the whole journey to Qatar was delayed by seven days.

At Augusta, police said they counted 409 people – not 510 – off the ship. The passengers were dispersed to unnamed immigration centres around Italy. Neither police nor the shipping company could explain the numbers discrepancy, but it is common for migrants to try to dodge police and continue their journey without being identified.

Manager Dhadwal was not allowed on the ship until everyone was off.

“I could smell a stench … the vomit, the urination on deck,” he said. “The whole ship was filthy. … Everything was dumped on board including the life jackets. We had to get the ship clean and fumigated and get health checks for the crew and replenish the ship.”

Dhadwal said the ship’s insurers paid for cleaning and some other costs, but the company is still in talks with them over reimbursement, and it has yet to agree costs with the charterers whose barley was delayed.

(By Jonathan Saul, Additional reporting by Steve Scherer in Rome, Tom Miles in Geneva, Aashika Jain in Bengaluru and Carolyn Cohn in London; Edited by Sara Ledwith and Simon Robinson)