You are here: Home › Shipping News › Sovcomflot Awarded By Russian Ministry Of Energy For Achievements In R&D And Innovations
TwitterFacebookLinkedInPinterestBuffer

PAO Sovcomflot (SCF Group) was awarded first prize at the 2017 International Competition of Scientific, Technical and Innovative Developments aimed at the Exploration and Development of the Arctic and the Continental Shelf, held under the auspices of the Russian Ministry of Energy.

The prize was awarded to a team of Sovcomflot experts for the development and practical implementation of technological solutions enabling year-round oil shipments from the Gulf of Ob. The winning team was led by Igor Tonkovidov, Executive Vice-President and Chief Technical Officer of Sovcomflot.

The awards ceremony took place in St. Petersburg on 12 September as part of RAO/CIS Offshore 2017 – the XIII International Conference and Exhibition for Oil and Gas Resources Development of the Russian Arctic and CIS Continental Shelf. The competition consisted of 102 projects presented by 68 organizations. 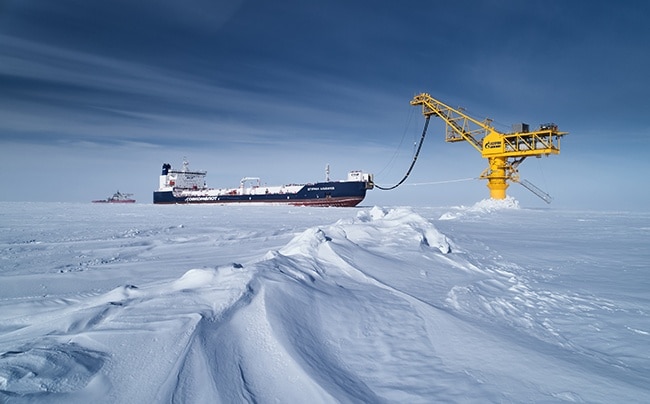 In 2016, SCF Group introduced a series of three unique Arctic shuttle tankers (Shturman Albanov, Shturman Malygin, Shturman Ovtsyn), purpose-designed for operations in the difficult navigational and ice conditions of the Gulf of Ob and the Kara Sea (serving the Novy Port project). The Gulf is covered with ice from October to July and has many shoals and shallow areas (less than 10 metres deep). The challenge was solved with designing a tanker that has high ice-breaking capabilities and a shallow draft. The introduction of these tankers enabled year-round, large-capacity, transportation of oil from the Gulf of Ob for the first time in history.

The 42,000 dwt tankers are able to break ice up to 1.8 metres thick, without assistance, and operate in temperatures down to minus 45 degrees centigrade. They have been assigned Arc7 ice class, the highest among existing cargo vessels. The vessels are registered under the Russian flag and have Saint Petersburg as their home port.

Sovcomflot operates the three shuttle tankers under long-term time charter to Gazprom Neft. In just under a year (September 2016 to August 2017), the three vessels made a total of 83 voyages from the Yamal Peninsular to Murmansk, safely transporting 2.8 million tonnes of crude oil. The high level of efficiency demonstrated by the tankers, along with the successful development of the Novy Port project, led to Sovcomflot placing an order for the fourth vessel of this series in July 2017. The new shuttle tanker is scheduled for delivery in 2019.

Four Containers Recovered From The Singapore Strait After Collision

Africa’s Most Innovative Port To Receive Automated Cranes
Want to share your tips and advice? Got questions? Visit the community forum to ask questions, get answers, meet people, and share your tips!