You are here: Home › Shipping News › South Korea Imports Eggs From US Via Ship For First Time
TwitterFacebookLinkedInPinterestBuffer

Marking the entry of eggs into the South Korea by sea for the first time, the US eggs have reached the North Asian country to help ease a supply shortage due to an avian influenza outbreak.

Korea’s shipping liner Hyundai Merchant Marine has reportedly delivered a total of 317,000 eggs that weigh 19 tons into the country, breaking the traditional way of importing eggs by chartered flights. 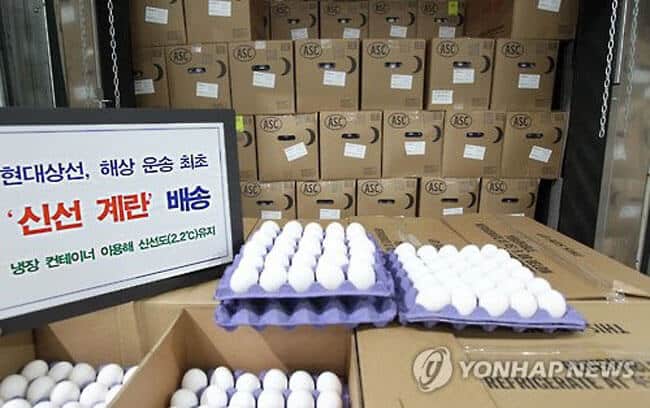 The company said the shipment was departed Seattle in the US on January 21 and arrived at the southern port of Busan last week.

An official of Hyundai Merchant added that the latest deal will see the further shipment of over 1.2 million eggs from the United States through Busan Port this week.

In January, the US had reached an agreement with South Korea to deliver shell eggs after the latter witnessed a shortage of eggs caused by an outbreak of the H5N6 strain in late 2016.

South Korea had banned the US eggs earlier after the US outbreak in 2015 that killed about 49 million turkeys and chickens. Reports said the latest deal makes Korea the first Asian country to buy large quantities of fresh US eggs.

The average daily egg output of South Korea was 42 million, but it has fallen below 30 million since November. The bird-flu outbreak has reportedly killed around 26 million chickens in Korea and a third of its egg-laying hens so far.

Everything You Ever Wanted to Know About Scavenge Fires