DNV GL’s Group President & CEO Remi Eriksen spoke about the potential of digitalization to move the maritime industry forward: “I think this year’s SMM has hit on the topic that should be at the top of the list for everybody in shipping looking to compete in this tough market: Digitalization. This is for me THE trend with the potential to revolutionize shipping. More satellite communication players are entering the market, giving us increased capacity, better coverage and lower costs to transfer data between ship and shore,” he said. “The companies that can capture the benefits of digitalization, bring them into practical use, and scale them to the point where they deliver real financial, environmental and societal benefits.

I believe it is in this role, as implementer and as a trusted data custodian, where DNV GL can really shine,” he explained. 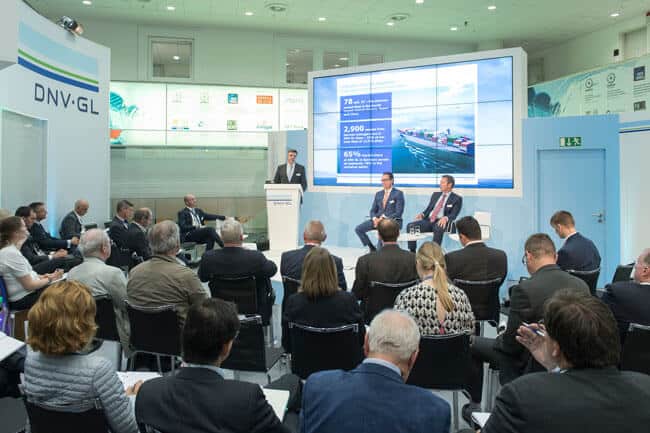 Knut Ørbeck-Nilssen, CEO of DNV GL – Maritime, set out some examples of how DNV GL’s customers could make their operations smarter with modern classification solutions. But as ships became smarter they would need to take new steps to ensure safety: “With ships and mobile offshore units becoming increasingly reliant on software-dependent systems, cyber security is an important operational and safety issue for the maritime world,” he said. This had prompted the development of the new DNV GL Recommended Practice (RP) on “Cyber Security Resilience Management”. Developed in cooperation with customers, the RP provides guidance on risk assessment, general improvements to cyber security, and the verification of security improvements and management systems.

DNV GL was continuing to help its customers utilize the data from their vessels and fleet to make their operations smarter, said Ørbeck-Nilssen. The ECO Insight fleet performance management solution had grown to over 750 vessels since its launch in 2015, he said, making it the leading product on the market. With a network that now included 14 partners and new features such as an environmental module that looked at individual emissions to air, water and land, MRV readiness and a performance support centre where customers could obtain direct advice on potential improvements, ECO Insight was setting the standard in this field, he said.

Continuing on its successful use of drones for surveys inside ship tanks, DNV GL had now conducted drone surveys on seven vessels covering a variety of different ship types. “This has now given us the experience to begin developing our own tailor-made drones which are fit for purpose,” said Ørbeck-Nilssen. At SMM DNV GL was already showcasing two drones that have been specially developed for class surveys, he said. The next steps included developing guidelines and training for drone surveys, and potentially updating the rules to reflect the use of remote inspection techniques.

Knut Ørbeck-Nilssen also highlighted some of the exciting projects DNV GL was featuring through the trade fair, including a memorandum of understanding between DNV GL and Japanese NGO Peace Boat to work together on the Ecoship design, an approval in principle for Hyundai Mipo Dockyard’s new Con-Green feeder vessel design and the launch of the second phase of the PERFECt (Piston Engine Room Free Efficient Containership) project.