Skangas’ new LNG bunker vessel, Coralius, arrives in June 2017. Her main operation area will be from the Kiel Canal to mid Norway, including part of the North Sea. Being flexible in terms of location, she can deliver Liquefied Natural Gas (LNG) both in ports and at sea.

The Coralius’ owners Anthony Veder from the Netherlands, and the Swedish company Sirius Shipping developed the vessel in co-operation with the Norwegian charterer and LNG expert Skangas. The three companies decided to draw upon their individual broad LNG experience with the aim of creating a flexible, efficient and safe system for LNG bunkering. 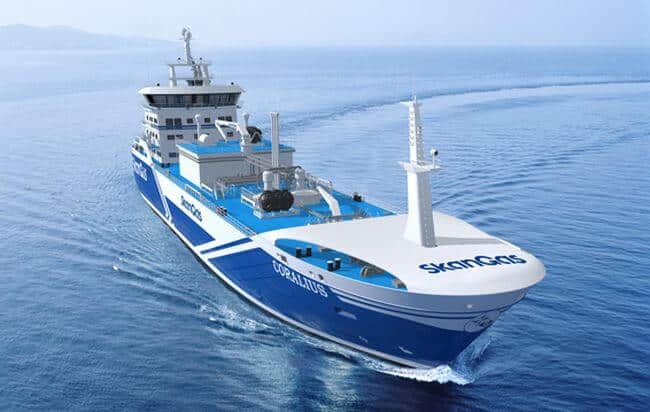 Coralius is built by the shipyard Royal Bodewes in the Netherlands, is owned by the joint venture Sirius Veder Gas AB and will be operated by Sirius Rederi AB of Sweden. She has a cargo capacity of 5,800 m3 and is 99.6 meters long. She holds a Finnish/Swedish Ice Class 1A. Larger volumes of LNG is transferred at high rates and Coralius is equipped with state-of the-art LNG transfer equipment for bunkering.

“LNG as marine fuel becomes even more accessible in our area by ship-to-ship bunkering,” says Tor Morten Osmundsen, CEO of Skangas. “Currently we bunker by truck and directly from our terminals, along the coast. From June this year, however, our customers can experience swifter and more flexible bunkering operations than ever.”

Ships generate emissions of sulfur oxides (SOx), oxides of nitrogen(NOx), particulate matter (PM) and carbon dioxide (CO2) as a result of the fuel used to power them. However, maritime shipping is the world’s most carbon-efficient form of transporting goods. Maritime traffic accounts for approximately 2.1% of the world’s CO2 emission.

Yet, the industry seeks to further improve the fuel efficiency and carbon footprint of its vessels. Ship owners world wide has turned to LNG as their primary source of fuel. By 2020 there will be nearly 200 vessels worldwide running on LNG. This number is expected to rise significantly, as LNG is recognized by the shipping industry as the most viable alternative fuel to reduced emissions.

LNG marine fuel meets all current SOx and planned NOx requirements. It also eliminates particles and reduced CO2 by at least 20%. LNG marine fuel is available, and will remain economically efficient for the foreseeable future.