The CESI Lianyungang is the sixth vessel in the China LNG Transportation Project announced in April 2013 and will sail under a long-term charter transporting LNG that SINOPEC purchases from the Australia Pacific LNG Project.

This project, which built LNG carriers in China, follows the ExxonMobil LNG project, announced in March 2010 (four newbuilding LNG carriers were ordered from Hudong and delivered by April 2016). Since 2013, to ensure the safety and high quality of the newbuilding LNG carriers, MOL has assigned technical experts to Hudong and created a shipbuilding supervision team made up of multinational staff, to oversee the construction of the six LNG carriers. The newly delivered CESI Lianyungang is the final vessel in the series. 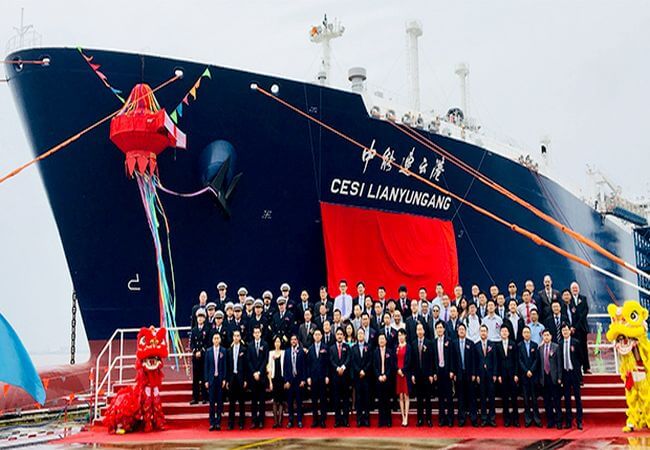 The five vessels already delivered for the project continue to provide safe, reliable service under the management of the joint ship management company (ownership: MOL 20%, CCSC and SINOPEC: 80%).

LNG, as a clean energy source, is drawing attention in China due to rising awareness of environmental issues. Last year, China overtook South Korea as the second-largest importer of LNG following Japan. China’s LNG market has shown steady growth, and demand is projected to further increase in the coming years.

MOL maintains the strong, trusting relationship it has developed with its Chinese partners through these projects and is now working with CCSC on the Yamal LNG project in Russia. MOL’s LNG transport know-how is playing a key role in expanding LNG demand in China as it further strengthens its ties with the nation.

In addition, MOL is currently involved in the operation of 96 LNG carriers (including FSRUs) and vessels under construction and aims to further expand its fleet. MOL continually strives to provide high value-added services to customers all over the glove, backed by the world’s largest fleet leveraging the experience gained in many international cooperative projects.