Silverstream Technologies, the leading air lubrication manufacturer for the shipping industry, today announced the signing of a Memorandum of Understanding (MoU) with leading shipbuilding group, Hudong-Zhonghua, part of the CSSC Group. The MoU will see Silverstream’s air lubrication technology – the Silverstream® System – integrated into Hudong-Zhonghua’s new building designs for its future LNG (liquefied natural gas) carriers in order to increase operational and fuel efficiencies, reducing fuel costs and emissions by between 6% and 8% for laden and ballast conditions.

Hudong-Zhonghua is a subsidiary of the China State Shipbuilding Corporation (CSSC), China’s largest shipbuilding group, and the second largest in the world. To-date, it is also China’s leading manufacturer of LNG carriers, with a capacity for six to eight vessels in its yard. 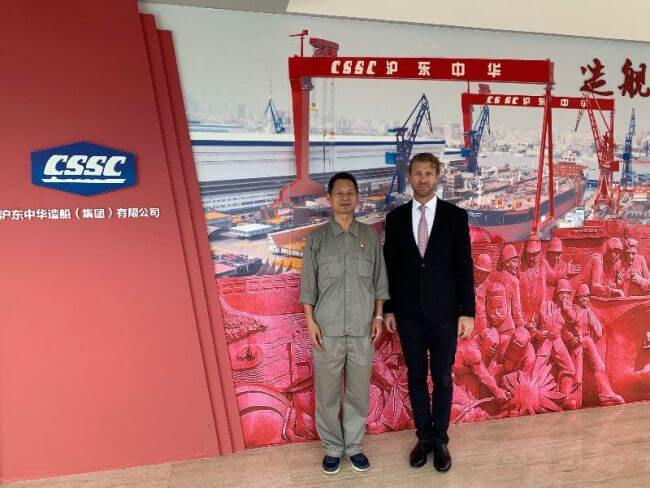 The MoU is a significant landmark for Silverstream, as it is the company’s first LNG class newbuild project. It also represents both the Asian market’s growing interest in air lubrication systems, and its wider demand for greater efficiencies and sustainability in newbuild orders.

“We are delighted and honoured to have signed this landmark agreement with Hudong-Zhonghua, one of the world’s largest and most respected ship yards. It is a significant step for Silverstream as we expand into a new vessel class, and further grow our customer base in the important Asian market.”

The signing of the MoU marks 12 months of in-depth collaboration between the two organisations, which culminated in the approval of Silverstream’s technology onto Hudong-Zhonghua’s LNG carrier newbuild designs. Both Silverstream and Hudong-Zhonghua will continue to collaborate to drive the sales process with prospective ship owners, working together to ensure the optimum efficiency and design on future orders from the yard.

“We are committed to bringing to market the most operational and energy efficient newbuild vessels for the LNG sector. In working closely with Silverstream over the past 12 months, we have seen the real attributes of air lubrication technology and the Silverstream® System, and it was clear that incorporating it into the designs for our newbuild LNG vessels, in conjunction with other measures, would deliver optimum performance. We are confident that these new vessels will set the benchmarks for vessel design and performance in the LNG sector.”

Additionally, the UK Government’s Department for International Trade has played an important role in developing the strong relationship between the UK and Asia, both in terms of maritime innovation, and bringing the two companies together.

“Asia is the world’s largest shipbuilding market, and combined with the UK’s pedigree for maritime innovation creates the foundation to create new technologies and ship designs that meet the sustainability challenges that the shipping industry faces. This agreement between Hudong-Zhonghua and Silverstream is evidence of this, and highlights the opportunity to continue to drive progressive and positive change.”