Innovators Ben Arntz and Nick Noordam of The Hague-based GBM Works have developed a noiseless method for sinking monopiles into the sea bed.With their invention, they have made it all the way to the finals of the Philips Innovation Awards. This new approach can substantially lower the installation costs of underwater deep foundations.

Nick Noordam and Ben Arntz have known each other for eight years. They first met while studying at Delft University of Technology. “Last year, we decided to start a business together,” says Noordam. He has a master’s degree in Aerospace Engineering, while Arntz is still working on his Offshore Engineering master’s. 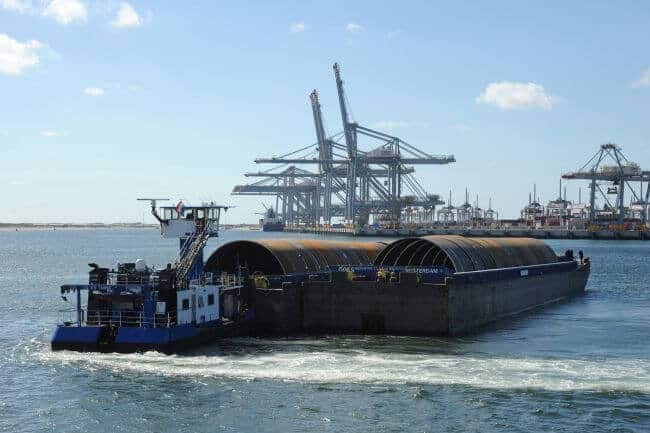 Two-and-a-half years ago, while working part-time at Heerema in Leiden, Arntz became aware of the need for a silent driving technique for foundation piles. “At the time, I was involved in the realisation of new pipelines off the Australian coast for an oil company. To lay these pipelines, you first need to sink a number of piles into the sea floor. This will not go unchallenged. The pile hammer used to drive the piles into the seabed generates high noise levels, which negatively affect the marine wildlife – particularly mammals.”

During specific periods of the year, piling is actually prohibited, in an effort to protect the sea animals. During the whale calving season, for example. When whales come too close to a piling site, the noise produced by piling – up to 180 decibel – can damage their health. The levels are comparable to the sound pressure generated by a rocket during take-off.

Some countries – Germany for example – have adopted strict legislation: noise levels may not exceed 160 decibel. That is why contractors often use a bubble curtain to reduce sound waves generated during monopile driving. This curtain is produced by a perforated tube, which is installed around the pile with the aid of an extra vessel. The tube uses pressurised air to create a sheath of bubbles. The bubbles break a share of the sound waves generated by the driver head, which attenuates noise levels. However, like piling interruptions, this solution comes at a price. According to a report published in 2015, measures of this kind add approximately € 300,000 to the installation costs per pile.

GBM Works’ idea is to ensure that the driving process itself makes next to no noise. Rather than use a hammer to drive the monopile into the seabed, the innovators have opted for liquefaction. Liquefaction is the geological term for the process whereby soil loses its strength and stiffness. In effect, the soil temporarily becomes a liquid, allowing the piles to sink into it.

The team are presently putting the finishing touches on the technical drawings for the first prototype. “We will be performing the first tests in June and July,” says Arntz. “Our first scale prototype has a diameter of 20 centimetres and is 5 metres long. The next prototype on our calendar will be ‘one size up’. Because the action of the soil itself also changes when you try to induce liquefaction on a larger scale.”

Their final goal is a validated method for the silent installation of monopiles with a diameter of 8 metres and a length of 70 metres. The two expect to further scale up this standard at some point in the future.

GBM Works’ long-term objective is to enable further cost reductions in the tapping of sustainable energy sources. Arntz and Noordam’s invention lowers the installation costs for offshore wind turbine foundations. The innovators expect this will ultimately lower the price of wind power itself.

The port of Rotterdam could benefit from GBM Works’ innovation in a number of areas. “Our innovation can also be used for the silent construction of new quays, sheet pile walls and bollards,” says Noordam.

In the run-up to the finals of the Philips Innovation Awards, the two have received valuable feedback on their business plan. How to present their value proposition more effectively, for example. “While there was nothing wrong with our long-term planning, it was rather ambitious,” according to Arntz.

In the finals, they will be going up against four other nominees. “We’ve set our chances of winning at 20%,” says Arntz with a smile.

The Port of Rotterdam Authority is one of the sponsor/partners of the Philips Innovation Awards. Students from all over the Netherlands are invited to enter their innovative ideas. Besides presenting an annual Award to the best innovative idea, PhIA helps and encourages participants to translate their concepts into a promising start-up. www.phia.nl