Shipping will require an additional 42,500 officers by the end of 2019 to cope with the expected growth in the main cargo carrying fleet, equivalent to 7% growth over the five year period. But the persistent shortage of officer crew is receding, according to the latest Manning report published by global shipping consultancy Drewry.

Current officer supply is in the order of 615,000 and there is a nominal shortfall of approximately 15,000 officers, which is expected to remain the case until 2019. In the main the shortfall is made up by officers working longer shift patterns.

“There is still a shortage of officers but the gap between demand and supply has narrowed as the recent growth in fleet size is coming to an end”, comments Malcolm Jupe, Lead Analyst at Drewry.

Although ratings remuneration packages tend to follow the International Transport Workers’ Federation (ITF) standard terms, officer earnings are more market driven; North West Europe is however the principle exception to the rule. In the current market, most ship owners cannot afford significant increases in wage rises and any increases which have been seen between 2014 and 2015 have been modest in nature. 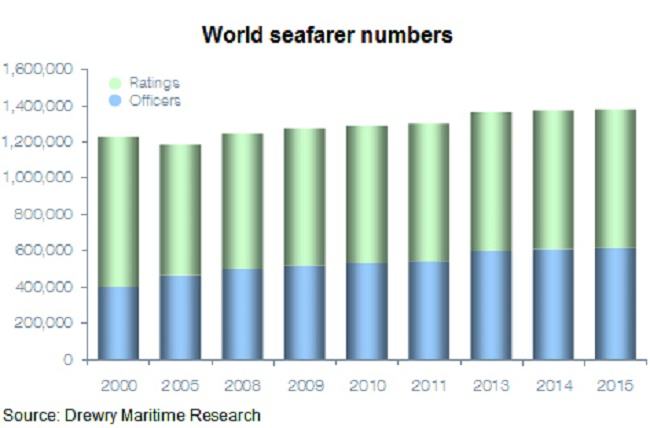 It is also the case that ships are getting bigger and larger ships provide more shipping capacity for the same number of vessels. This is also helping to ease some of the pressure on manning.

“Manning is normally the single largest cost head in ship operations. Keeping these costs under control remains very important to all ship owners, especially when trading conditions are weak, as is the case in some of the key shipping freight markets – such as dry bulk carriers”, concludes Jupe.