You are here: Home › Shipping News › Unique Tanker That Can Also Carry Both Container And Dry Bulk Cargo Launched
TwitterFacebookLinkedInPinterestBuffer

On July the 10th the first vessel under the new RST54 project for sea-and-river-going vessels was officially launched at Okskaya Shipyard (town of Navashino, Nizhny Novgorod region). The vessel was named “Balt Flot 1”. The project is commissioned by BF Tanker.

The RST54 concept is unique in its approach. This one-of-a-kind “platform/tanker” vessel created to be maximally effective during both legs of each round voyage (carrying oil when going to its destination and dry cargo on its return trip). Thus, it is planned to achieve the highest possible economic efficiency of the vessel’s operation given the seasonal nature to the river transport infrastructure in Russia. 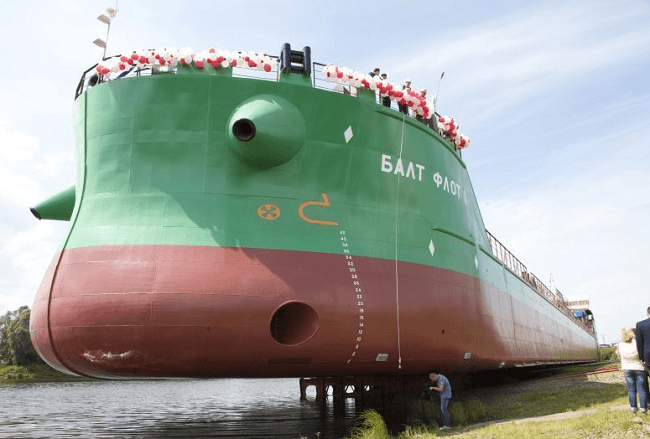 As UCL Holding’s Director of Shipping and Shipbuilding Rishat Bagautdinov said, “The RST54 project is based on the idea of creating a genuinely general-duty cargo vessel capable of significantly improving the efficiency of operations in the restricted context of the available river infrastructure and the seasonal nature of the inland waterways navigation. Increasing the potential amount of cargo transported will make it possible to provide reasonable periods of investments return as well as raise funding for new vessels at attractive conditions.”

An RST54 vessel is a self-propelled combined (oil/dry cargo) “Volgo-Don Max” class platform vessel with a deadweight of 5,589 tons intended for transporting up to 5,250 tons of light and dark oil products as well as general and bulk cargo, including gravel, metals, timber, coal, bulky and heavy cargoes. The motor vessel can carry up to 148 TEU’s worth of cargo in containers, up to 320 cars, up to 4,500 tons of bulk cargo. 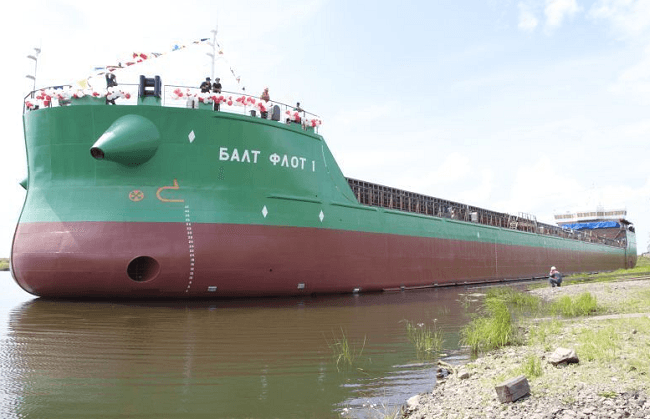 The vessel’s design is intended to ensure the best possible navigational performance in the the Unified Deep Water System of Russia taking advantage of its maximum full body lines first used at RST27 tanker construction for UCL Holding purposes. The RST54 project vessels are compatible with the width and depth of the Volga-Don Canal and the Volga-Baltic Waterway. Their overall length is 140.85 m, their width is 16.6m, and their depth is 6.0 m. The RST54 project has been developed by the Maritime Engineering Bureau.

Since its keel-laying on 16 December 2013, the first vessel was finished in 7 months. The vessel will be delivered to the Client in September 2014 after sea trials and will be operating under a long-term contract with Litasco — international trading operator of Lukoil OJSC. BF Tanker plans on building a total of 10 RST54 project vessels by 2015. RST54 project vessels continue to be built at Okskaya Shipyard today. On May 28, 2014 the fifth vessel was laid down there.

India To Include Shipyards Under The Harmonized List Of Infrastructure Sectors