A stunning interactive map shows a year in the life of global shipping. Its co-creators Duncan Clark and Robin Houston discuss how their data visualisations can be interpreted.

A map showing the activity of shipping vessels won first place in the Interactive category at the Information is Beautiful Awards this year. The website, shipmap.org, plots thousands of ships on their journey through canals, major rivers and the high seas: activity often well out of sight for the general public. Geographical interviewed Duncan Clark and Robin Houston, the creative duo behind the prize-winning visualisation and founders of a new data visualisation platform, Flourish.studio. 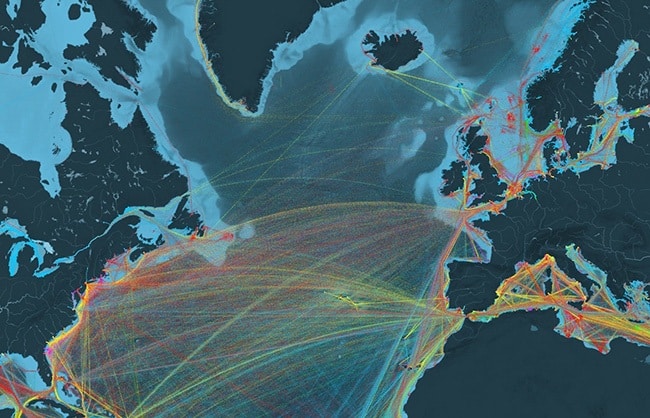 The data load in these maps is immense, how did you source it?

Robin Houston: It came to us via UCL and ExactEarth, but ultimately it comes from the ships themselves. It plots the broadcasts of vessels over one year – 2012.

Duncan Clark: The University’s idea was to do a project on shipping and CO2, they showed us the data and asked us our opinion. We said that although the carbon dioxide angle is important, it would be more compelling to plot this data to show just how massive the global shipping is. CO2 is a vital, though secondary, element to the industry as a whole. 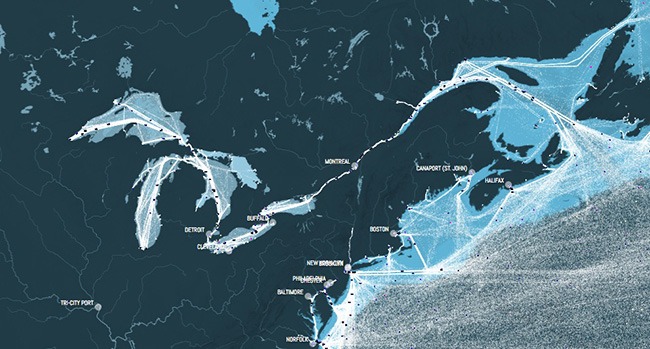 As you waded through the data, was it possible to see any patterns emerging?

RH: At first there was no way to make sense of it at all. It came to us as a collection of data tables comprising of a quarter of a billion data points. It had longitudes, latitudes, times, speed and a few other bits of information such as CO2 emission estimates, the type of vessel and capacity. There were so many elements that it wasn’t possible to make any sense of it by just looking at the numbers.

DC: However, as the map got closer to being finished there were two layers of stories that emerged. The first was the ubiquity of vessels all over the map, the dots are everywhere. The idea that each of those coloured marks represents thousands of tonnage of ship is the main narrative here. And then there are these secondary, regional stories that begin to emerge. For example, there are no ships off the coast of Somalia because of all the issues with piracy, at the same time you can see the school of oil tankers moving around the Persian Gulf.

RH: I thought the number of tankers supplying gas to Japan was particularly interesting, as it was a story pretty unique to 2012. Following the 2011 Fukushima disaster, Japan decommissioned all of its nuclear power stations, which meant that it suddenly imported gas as a means to generate enough power to cover the shortfall. You can see a huge amount of gas tankers supplying Japan with gas. There’s a lot of little micro-stories in there, some of which are provided in the narrative on the side.

Shipping has increased by 300 per cent since the 1990s. Do you have plans to add older data from previous years to the maps? Or to keep adding future data to it similar to how Global Forest Watch does with trees?

DC: The current map can only compare different points in the year and because of the nature of shipping, it doesn’t change all that much season to season. To find a way to compare present levels of shipping with those at the turn of the millennium would be huge.

RH: The other answer is that if anyone gets me a decent set of more recent shipping data, I’d love to put it up!

Where to next with data visualisation?

DC: The next phase for that project is part of a much bigger change for us. We’ve just shifted from a little agency that does individual projects into a company that is making a platform called flourish.studio. Instead of making individual visualisations, we can make templates that other data gatherers can attach data to. Take the ship map template, for example. That tech has already been reused to plot the movements of the entire US trucking fleet based on US Census Bureau data. Often these bespoke graphics that people spend months making are thrown away once they have served their purpose, and everything has to be reinvented from scratch. The aim of flourish is to create templates that can be used for different data sets more than once. The tech can be reused lots of times to represent lots of different data.