Shipping losses continued their long-term downward trend with 75 reported worldwide in 2014, making it the safest year in shipping for 10 years, according to Allianz Global Corporate & Specialty SE’s (AGCS) third annual Safety and Shipping Review 2015, which analyzes reported shipping losses of over 100 gross tons.

Losses declined by 32% compared with the previous year and were well below the 10-year loss average of 127. Since 2005 shipping losses have declined by 50%. More than a third of 2014’s total losses were in two maritime regions. South China, Indo China, Indonesia and the Philippines (17 ships) and Japan, Korea and North China (12 ships). Cargo and fishing vessels accounted for over 50% of all losses.

The most common cause of total losses is foundering (sinking/submerging), accounting for 65% of losses in 2014 (49). With 13 ships wrecked or stranded, grounding was the second most common cause with fires/explosions (4) third, but significantly down year-on-year. 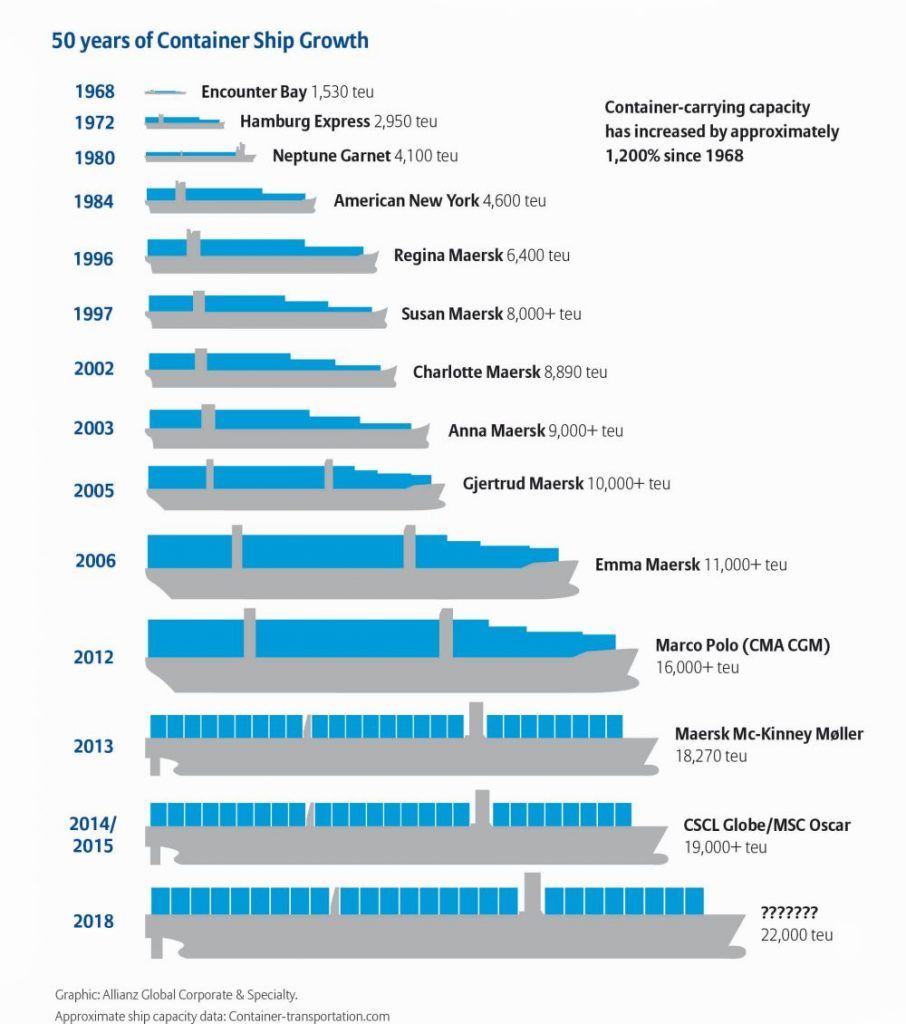 One vessel in the Great Lakes region of North America lays claim to the title of unluckiest ship. Analysis shows it has reportedly been involved in 19 incidents in the past 8 years – including six in one year. It has suffered a fire, engine failure, steering failure and even hit a submerged log.

Passenger ship safety and crew levels in the spotlight

While the long-term downward trend in shipping losses is encouraging, recent casualties such as Sewol and Norman Atlantic have once again raised significant concerns over training and emergency preparedness on passenger ships three years after the Costa Concordia disaster. Seven passenger ships were lost during 2014, accounting for almost 10% of total losses. “In many cases construction of the vessel is not the only weak point. These two incidents underline a worrying gap in crew training when it comes to emergency operations on ro-ro ferries or passenger ships,” said Sven Gerhard, Global Product Leader Hull & Marine Liabilities, AGCS.

The general shipping trend for smaller crews means seafarers are being asked to do more with less. Minimum manning levels reduce the ability to train people onboard, which can provide invaluable insight and should not become the normal day-to-day level for safe operations.

How big is TEU big?

Container ship safety is also under the spotlight with ever-increasing ship sizes, as evidenced by the January 2015 inauguration of the world’s largest container ship, the MSC Oscar (19,224 teu). The length of four football pitches, it can carry 19,000 containers. Yet ships as large as 22,000 teu are expected to be in service soon. “Larger ships can also mean larger losses. The industry should prepare for a loss exceeding $1 billion in future featuring a container vessel or even a specialized floating offshore facility,” Gerhard said. Maximum exposure would not necessarily be limited to vessel and cargo value but could also include environmental or business interruption backlash. This raises concerns about whether risk management needs reviewing after an 80%+ container ship capacity increase in a decade.

AGCS sees a number of risks for such mega-ships including the fact operation is limited to a small number of deep water ports, meaning an increased concentration of risk. There is also a world-wide shortage of qualified seaman. Salvage and removal is also challenging. As the wreck removal of the Costa Concordia passenger ship demonstrated such costs can easily be a multiple of the hull value. “The shipping industry should think long and hard before making the leap to the next ship size,” added Captain Rahul Khanna, Global Head of Marine Risk Consulting, AGCS.

Cyber risks represent another new threat for a shipping sector which is highly interconnected and increasingly reliant on automation. “Cyber risk may be in its infancy in the sector today, but ships and ports could become enticing targets for hackers in future. Companies must simulate potential scenarios and identify appropriate mitigation strategies,” said Khanna. “A cyber-attack targeting technology on board, in particular electronic navigation systems, could possibly lead to a total loss or even involve several vessels from one company,” said Gerhard. Other scenarios include cyber criminals targeting a major port, closing terminals, or interfering with containers or confidential data. Such attacks could also result in significant business interruption costs, notwithstanding liability or reputational losses.

The shipping industry has welcomed the recent arrival of the Polar Code which aims to curb risks from increased traffic in the Arctic and Antarctica. Analysis shows there were 55 reported shipping incidents in Arctic Circle waters during 2014 including one total loss. There were just 3 in 2005. While the code addresses many safety issues, questions remain, particularly around crew training, vessel suitability and potential clean-up. The Polar Code will need constant revision. Any shipping problems encountered and best practices to employ should be outlined at the end of each season.

Other risks identified in the 2015 Safety & Shipping Review include: 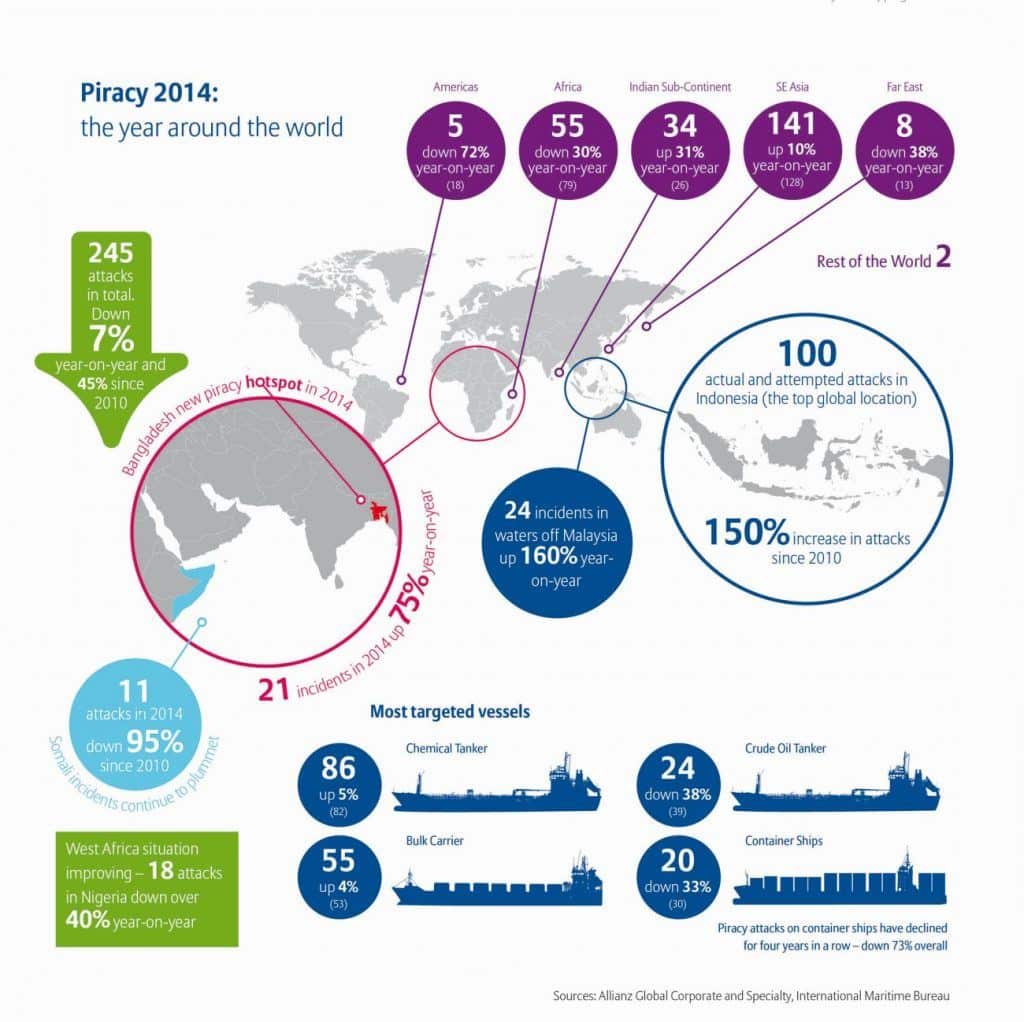