Shipping confidence held steady in the three months to end-February 2017, according to the latest Shipping Confidence Survey from international accountant and shipping adviser Moore Stephens.

In February 2017, the average confidence level expressed by respondents was 5.6 out of 10.0, unchanged from the previous survey in November 2016 and equal to the highest rating since August 2015. Owners were the only main category to show an improved level of confidence, up from 5.4 to 5.6. Confidence on the part of charterers was down from its all-time survey high of 6.8 to 5.9, while that of managers fell from 6.4 to 6.0. Confidence levels in the broking sector, meanwhile, dropped from 5.6 to 4.6. The survey launched in May 2008 with an overall confidence rating of 6.8.

Respondents generally felt that competition was running at very high levels, while other familiar concerns included overtonnaging and geopolitical uncertainty. Most respondents saw 2017 as a year of retrenchment rather than improvement. One said, “If owners can maintain their discipline and resist the blandishments of shipyards desperate for business, there is hope that 2018 will see a return of market equilibrium, in which continued scrapping remains a key element.” Another, meanwhile, noted, “The current state of most shipping markets, coupled with the weakness of banks, means that conditions should be more attractive for alternative lenders.”

The likelihood of respondents making a major investment or significant development over the next 12 months was unchanged for the fourth successive quarter, at 4.9 out of 10.0. Managers’ expectations were up from 5.2 to 5.6, the highest level since August 2015. Owners’ expectations were also up, from 5.0 to 5.1, but those of charterers and brokers were down, from 6.4 to 5.8 and 3.8 to 3.4 respectively. 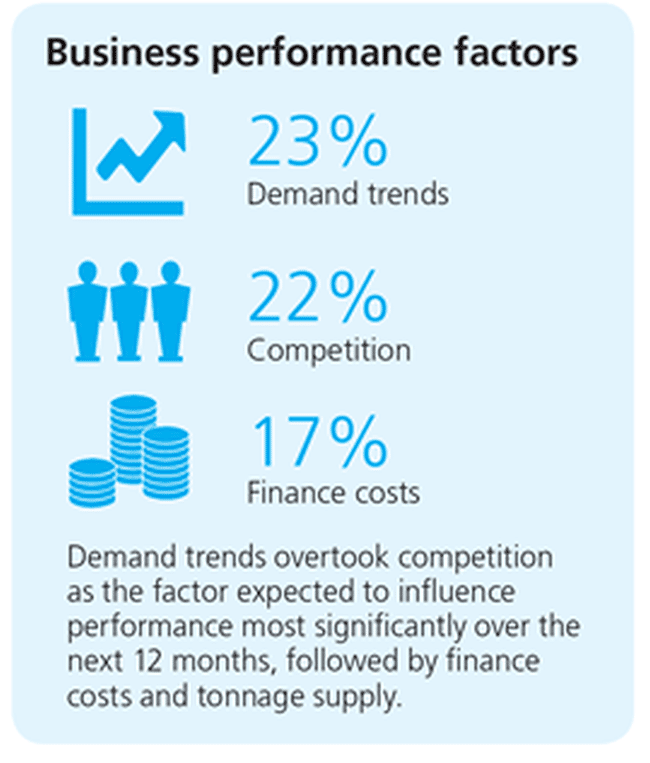 The number of respondents expecting finance costs to increase over the coming year rose by one percentage point to 54%, the highest level since November 2011. Owners’ expectations of increases fell from 58% to 57%, while the figures for brokers were also down, from 53% to 41%. Managers were of a different mind, with 61% expecting increases as opposed to 52% in November 2016.

Demand trends overtook competition as the factor expected to influence performance most significantly over the next 12 months, followed by finance costs and tonnage supply. “Competition is so intense at the moment,” said one respondent: “that you either accept what is offered or a competitor will take the cargo.” 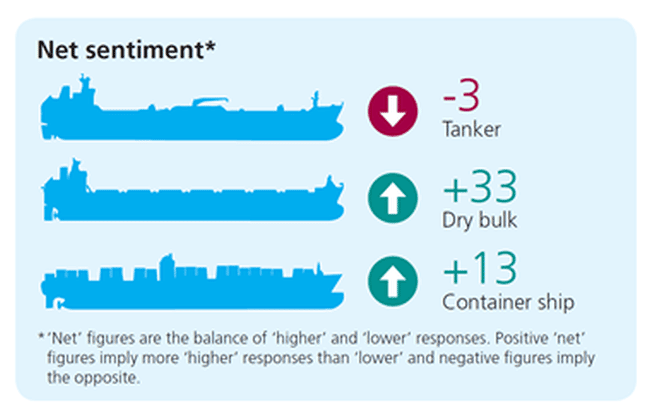 The number of respondents expecting higher rates in the tanker market over the next 12 months fell by eight percentage points to 25%, while the number anticipating lower tanker rates rose from 24% to 28%. Meanwhile, there was a three-percentage-point rise, to 44%, in the numbers anticipating higher rates in the dry bulk sector, although one respondent remarked, “The dry bulk freight market will continue to be tough, with returns not much above break-even”. In the container ship sector, the numbers expecting higher rates rose from 27% to 31%, while there was a three-percentage-point fall, to 18%, in those anticipating lower container ship rates. The net sentiment in the tanker markets was -3 (compared to +9 in November 2016), while it was +33 (up from +31 last time) in the dry bulk markets and +13 (compared to +6 in the previous survey) in the container ship trades. 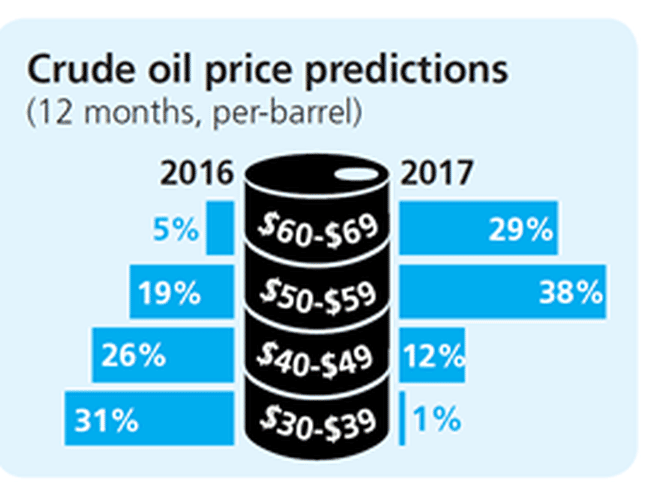 Richard Greiner, Moore Stephens Partner, Shipping & Transport, says, “After three successive quarterly increases, shipping confidence has held steady. This is encouraging given the continuing political uncertainty in the US and Europe. Shipping is vulnerable to changes in the political landscape, and a slew of elections in leading industrialised nations will render it particularly so this year.

“Elsewhere, the issues facing the industry include an over-supply of ships and insufficient demolition. Freight markets are dragging along the bottom in many sectors, with net rate sentiment in the tanker market being particularly low. Add to this the expectation of higher ship finance costs, the mounting costs of regulation, the threat of cyber-crime and projected increases in operating costs and it is evident that shipping will not be a picnic for the foreseeable future.

“But shipping is not a natural fit for the pessimist, and those with meaningful experience of the industry will be looking with some justification for a re-strengthening of rates in the tanker and dry-bulk trades, supported by continued rationalisation of newbuilding plans and accelerated recycling levels. Meanwhile, oil prices will continue to go up, which is mixed news for the shipping industry. For those who can effectively manage risk and volatility, shipping is still the place to be.”