Damen and its partners have won the Royal Netherlands Society for Marine Engineering (KNVTS) ‘Ship of the Year Award’ for Nh1816, the first of a series of the SAR 1906, a revolutionary new Search & Rescue boat, at the Maritime Awards Gala 2014 held in Rotterdam.

Jaap Gelling, Director High Speed Craft of Damen, says: “We are absolutely delighted that this very special vessel has received this accolade. The SAR 1906 is sailing proof that investment in R&D and innovation works!” 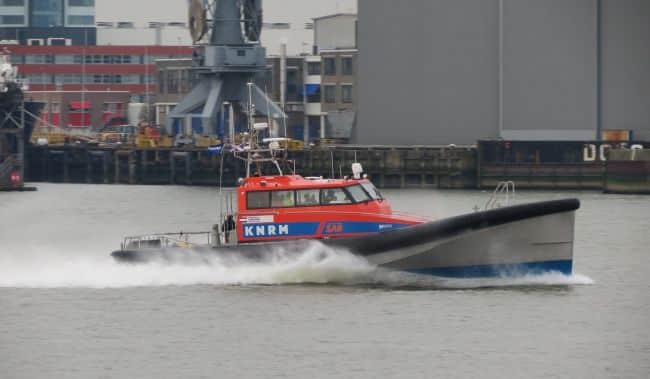 “We started working on this next generation Lifeboat in 2009. Various concept designs were jointly made and these were extensively tested by Delft University of Technology. There is no other lifeboat in the world for which such an enormous amount of R&D has been carried out. The final design was only reached due to the excellent cooperation between all the parties.”, Jaap Gelling says.

The SAR 1906 is a 35-knots self-righting vessel, with an aluminium hull and a composite wheelhouse. The hull design is based on the Axe Bow technology, adapted for the specific operations of lifeboats.

Damen delivered the first vessel to KNRM in the beginning of 2014. But the longer-term plan is that the SAR 1906 replaces the KNRM’s ‘Arie Visser Class’, which already has a reputation for being one of the best lifeboats in the world.

Mr Gelling adds: “We have kept and improved all the great things of the Arie Visser Class boats and solved the less favourable aspects – the SAR 1906 is simply better in all respects. Seakeeping is fantastic, manoeuvrability, course stability and crew comfort is vastly superior.”

“KNRM is willing to help Damen offer the new type to other SAR and coastguard organisations – which is very much appreciated by Damen, as the best publicity comes from happy customers.” There is already a great deal of market interest.

Principal innovations in hull design, ergonomics, communications and navigation systems, along with many other new features give the SAR 1906 superior capabilities when compared to conventional lifeboats. Speed, range, efficiency, seaworthiness and safety are all aspects that have been fundamentally improved in the design, as well as ease of maintenance.

In addition to the Sea Axe, the SAR 1906 is outfitted with retractable fins near the stern that can be lowered for more course stability or raised to get extra manoeuvrability. In the wheelhouse, state-of-the-art fully integrated electronics permit real-time data exchange for ship-to-shore communications.

Crew comfort has been enhanced by reducing slamming, but also by several ergonomic features such as specialised chairs, climate control, improved visibility, reduced vibration and – last but not least – extreme reduction of noise levels.

The vessel’s dimensions are generous, giving extra space not only on deck – which can accommodate no less than 125 survivors – but also in the engine room. This gives the crew better access to improve maintenance operations.

“The development of the Nh 1816 has been a process of true cooperation in ‘The Golden Triangle’”, says Roemer Boogaard, the sea rescue institutions’ Director. “A perfect example of innovation by user, knowledge institute and manufacturing industry together – something the Dutch maritime industry continues to invest in. Also unique is the fact that the vessel has been fully built under Class by Lloyd´s!”

“Together, and with a strong sense of community involvement and social commitment, we helped each other with knowledge, both theoretical and practical, and skill to develop this innovative Search & Rescue vessel. Winning the KNVTS Ship of the Year Award is a welcome recognition of these efforts and we are very, very proud of that.”, says Roemer Boogaard, to which Jaap Gelling adds: “Indeed! Getting the ‘Ship of the Year Award’ is the icing on the cake of this great project!”

Photos of the Maritime Awards Gala by Ruud Aantjes (Navingo)