Three years before the cruise ship he was steering capsized in the Yangtze River, the Chinese government honoured captain Zhang Shuwen for saving the life of an elderly man who had suffered an asthma attack.

Zhang is now the focus of attention after his ship, the Eastern Star, sank on Monday night during a fierce storm, in what may be China’s worst maritime disaster in almost 70 years. At least 19 bodies have been found and more than 400 people are missing.

Zhang escaped alive and is in police custody, although he has not been accused of any wrongdoing.

Until the incident, Zhang was regarded as an effective captain. He received an “outstanding employee” award by the Chongqing Eastern Shipping Corporation last year, state news agency Xinhua cited Liu Yiqing, an electrician and colleague of Zhang, as saying.

The son of a former shipping captain, he has been a captain for more than a decade, said Zhao Chunyuan, a retired cargo ship captain who used to work with Zhang. 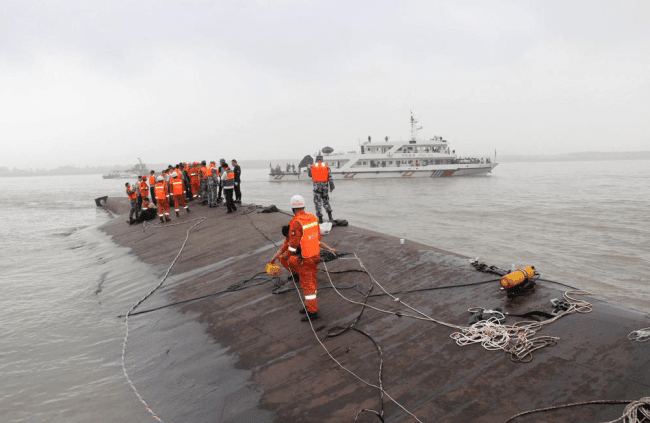 He has sailed the route between the southern Chongqing municipality to the city of Nanjing for seven or eight years, Zhao said. On Monday night, the Eastern Star capsized roughly midway between the two cities.

“He was a good man and I think there must be objective reasons for the cause of the accident,” Zhao told Reuters by telephone.

Two former colleagues said Zhang was aged 51 or 52. His wife was also an employee on the ship and her whereabouts are not known, according to state-run China News Service.

Zhang’s mobile phone was turned off when Reuters tried to reach him for comment. Police from the Yangtze River Navigation Administration, which took Zhang into custody, did not answer calls for comment.

Public opinion has been split on Zhang’s responsibility but several microbloggers have defended him, pointing out that the circumstances of the ship sinking are not reminiscent of last year’s ferry disaster in South Korea. The captain of the South Korean ferry, Lee Joon-seok, was jailed for 36 years last November after being found guilty of negligence.

Many said Zhang should not be made the “scapegoat” without a full investigation into the incident.

A Chinese microblogger called “Biemuxi”, who said Zhang is her uncle, urged the public not to blame him.

“My uncle is a reliable person and he has not had any accidents since working as a captain for so long, he takes his work very seriously,” she wrote on Weibo, China’s version of Twitter. She did not respond to a request from Reuters for comment.

In April 2012, 78-year-old Zhang Lin was gasping for air on an Eastern Star voyage bound for Wuhan, according to a statement on the China Water Transport Website, which is governed by the Ministry of Transport.

Captain Zhang Shunwen called the Wuhan Yangtze River maritime traffic control centre, asking them to open a channel that would allow him to berth quickly.

Relatives of passengers on the ill-fated 11-day trip this week have questioned why the ship continued to sail despite the stormy weather.

“I can’t understand why the boat kept going,” said Cai Bin, 39, whose 67-year-old mother was on the ship. “If the weather was so bad, why they didn’t they stop the boat at a wharf?”

Zhang was quoted as saying by Xinhua that the ship overturned “within one or two minutes”. He was dragged out of the water near a pier just before midnight on Monday.

He could be found culpable if he had abandoned the ship, said James Hu, professor at the Shanghai Maritime University and an expert in maritime law, though there is no evidence he did.

(By Sui-Lee Wee, Additional reporting by Brenda Goh and Sue-Lin Wong in SHANGHAI and Beijing Newsroom; Editing by Rachel Armstrong)

Rolls-Royce Waterjets And MTU Engines To Be Employed In Hong Kong’s Fast Ferries
Want to share your tips and advice? Got questions? Visit the community forum to ask questions, get answers, meet people, and share your tips!