The wreckage of a passenger steamship that sank in the 19th century after a collision in the San Francisco Bay has been found near the Golden Gate Bridge, officials said on 23rd April.

The steamship City of Chester was discovered by researchers using sonar in waters about 216 feet deep. It was encased in mud.

“The ship is very much intact,” said James Delgado, director of Maritime Heritage at the National Oceanic and Atmospheric Administration (NOAA), who has investigated other shipwrecks. 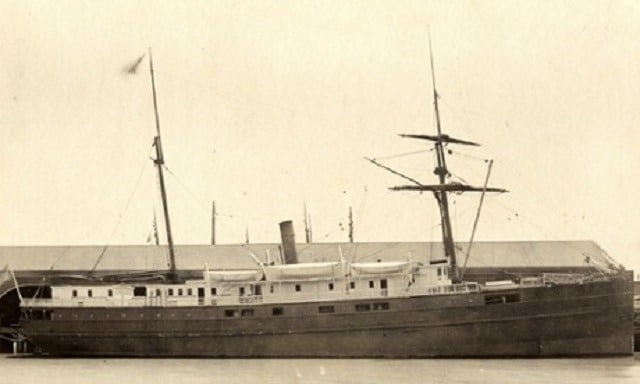 A boat equipped with sonar scanners captured the first underwater images of the City of Chester last May. It took NOAA researchers nine months to review the data and reconstruct images of the ship, which came to rest upright at the edge of a sandbank, NOAA said in a statement.

High-resolution sonar imagery identified the hull of the ship rising 18 feet from the sea floor and a large gash on the vessel’s left side, NOAA said.

The 202-foot long City of Chester, which was heading up the California coast to the city of Eureka, was nearly cut in half by the steamer Oceanic in August 1888. Sixteen people were killed.

The collision fueled a racially charged backlash against the Oceanic’s mostly Chinese crew, despite their having rescued most of the City of Chester’s 106 passengers, Delgado said.

NOAA’s predecessor, the U.S. Coast and Geodetic Survey, located the sunken ship by dragging a wire from a tugboat and snagging it, Delgado said. The last reported sighting was by a diver in 1889.

There are no plans to raise the City of Chester, which likely is a tomb for some of its passengers, Delgado said.

NOAA is building a website to tell the story of the City of Chester and is planning a San Francisco exhibit of sonar images and historic photos of the ship later this year.

Delgado said the tale of the City of Chester is important because it deals with timely issues of immigration and racism, and because it is a reminder of discoveries yet to be made in “the world’s largest museum.”