Shell has launched the first 100% LNG powered tank barge at a Christening ceremony attended by Shell CEO Peter Voser at Peters Shipyards in The Netherlands.

This LNG powered barge is a first for Shell and for the inland marine industry.

Dr. Grahaeme Henderson, Shell Vice President Shipping & Maritime commented:  “We are thrilled to see this first LNG powered barge in operation. Through innovation, a shared vision and a great deal of dedication, LNG powered barging has become a reality. Shell anticipates a bright future for LNG as a fuel in both coastal and inland shipping as it can help customers meet strict emissions standards such as those that are due to apply on the Rhine.” 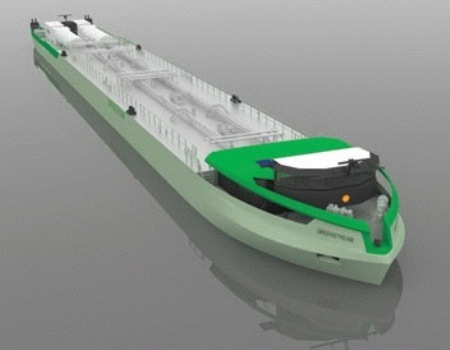 The LNG powered barge, Greenstream, has been built and designed at Peters Shipyards in The Netherlands and will be managed by the Dutch based Interstream Barging (ISB). This is the first of two new LNG powered barges to be chartered by Shell. Greenstream has been launched on schedule and will start operating on the Rhine in the next few weeks.

Greenstream has been designed with many new safety and efficiency features. For example, she has four small efficient engines rather than one large engine as in traditional barges.  This means that power can be varied as less is required to travel downstream than upstream with potential for fuel savings.  These engines will operate at lower frequency than traditional barges, reducing vibration and noise levels which could be advantageous when traveling through populated areas on the Rhine. This new LNG powered barge will operate in The Netherlands, Belgium, Germany and Switzerland.

The launch is part of the longer term development of a new European LNG marine fuel industry with the potential to fuel inland barges, ferries, tugs or even cruise ships.  Shell’s recent acquisition of Gasnor, the Norwegian LNG fuel company, is another example of Shell’s confidence in this sector’s future. In addition, over the next few years Shell will develop two LNG corridors, primarily for the marine industry in the Gulf Coast and Great Lakes areas of North America.