A total of seven incidents of armed robbery against ships were reported in Asia in July 2018. No piracy incident was reported. There was also no report of the abduction of the crew in the Sulu-Celebes Seas and no hijacking of ships for theft of oil cargo.

In July 2018, a total of seven incidents (all actual incidents) of armed robbery against ships were reported. All incidents have been verified and reported to the ReCAAP ISC by ReCAAP Focal Points and Contact Point. Refer to the Appendix on pages 16-18 for the description of these incidents. 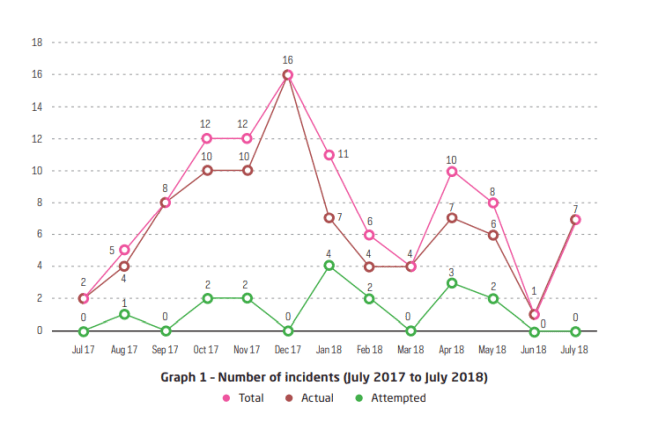 Of the seven incidents reported in July 2018, one was a CAT 2 incident and six were CAT 4 incidents.

There were no CAT 1 and CAT 3 incidents. Majority of the incidents were CAT 4 (petty theft cases).

Chart 1 shows the significance level of incidents reported in July of 2009-2018. 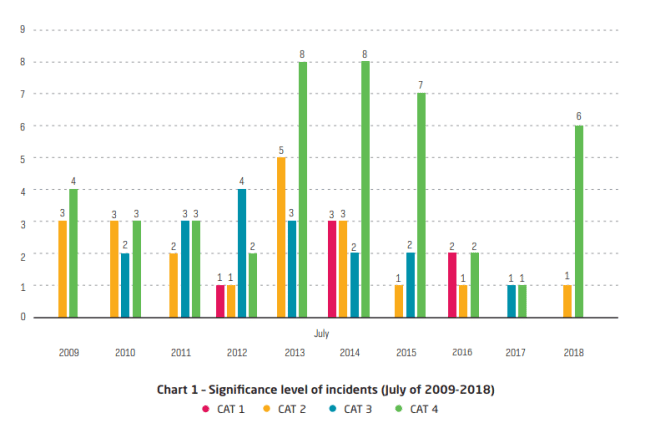 A total of 47 incidents comprising 36 actual incidents and 11 attempted incidents, had been verified and reported to the ReCAAP ISC during January-July 2018. Graph 2 shows the number of incidents reported during the 10-year reporting period.

SITUATION IN THE STRAITS OF MALACCA AND SINGAPORE (SOMS)

Of the seven incidents reported during January-July 2018, two occurred in July, two in May, one in April and two in January. The latest two incidents in July 2018 involved tugboat, Sung Fatt 31 towing barge, Sung Fatt 38 loaded with scrap metal while underway in the westbound lane of the Traffic Separation Scheme (TSS) in the western sector of the Singapore Strait on 3 Jul 18; and the other incident involving tugboat, Bintang Ocean 3 towing barge, Winbuild 2313 while underway in the eastbound lane of the TSS in the eastern sector of the Singapore Strait on 7 Jul 18. In both incidents, the masters and crew did not notice the sampans alongside the barges. The perpetrators boarded the barges from the sampans and escaped with scrap metal from Sung Fatt 38 and coils of tow line from Winbuild 2313.

The ReCAAP ISC advises all ships to exercise enhanced vigilance and report all incidents to the nearest coastal State. Tugboats towing barges loaded with cargo are relatively more vulnerable as they are slower in speed, with lower freeboard and unmanned barges. On the part of the authorities, the relevant enforcement agencies are encouraged to beef up their surveillance, increase patrols and render assistance promptly to reports made by victim ships. Tugboats are advised to enhance vigilance with their towed barges.

There was no report of actual or attempted incident involving the abduction of a crew from ships while underway in the Sulu-Celebes Seas and waters off eastern Sabah in July 2018. The last actual incident reported to the ReCAAP ISC occurred on board Super Shuttle Tug 1 on 23 Mar 17; the last attempted incident occurred on board Kudos 1 on 16 Feb 18. As of 31 July 18, nine crew is still held in captivity. The Philippine authorities continue to conduct pursuit operations and intensify its military operations to rescue the abducted crew and neutralise the militant groups.

Inputs from the Philippine Coast Guard who is ReCAAP Focal Point revealed that the threat is not eradicated and there were reports that the militant groups had been able to recruit and replenish its ranks and continue to attempt to stage abductions. The possibility of resurrecting maritime piracy and kidnappings is plausible when the opportunity arises given the complex maritime environment of the Sulu-Celebes Seas.

Click Here To Read The Entire Report From ReCAAP