SSCV Sleipnir is a new-generation semi-submersible crane vessel with a pair of revolving cranes that can lift 20,000 tonnes in tandem – no other existing crane vessel has this capability. The vessel is also the first dual-fuel crane vessel, with engines running on MGO and LNG for sustainable operation across all environmental jurisdictions 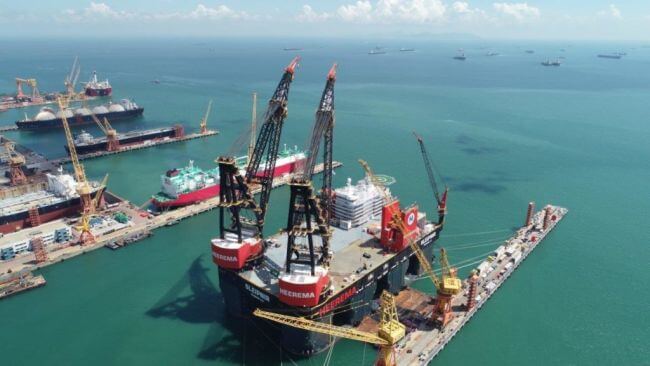 The world’s biggest semi-submersible crane vessel (SSCV) is set to blaze a trail when it enters into service in the coming months, armed with the strongest pair of revolving cranes for offshore oil, gas and renewable energy installation and decommissioning jobs. 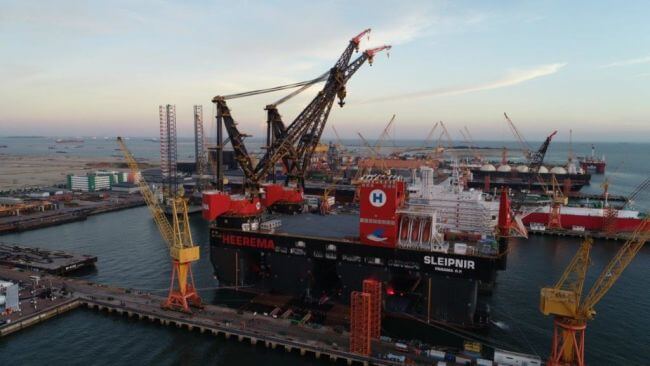 The vessel also has two 10,000-tonne revolving cranes which can lift loads of up to 20,000 tonnes in tandem. No other existing crane vessel has this capability.

Sleipnir can accommodate 400 persons and will be deployed globally for installing and removing jackets, topsides, deep-water foundations, moorings and other offshore structures.

Importantly, with its single-lift capability catering to larger integrated structures than previously possible, Sleipnir will minimise offshore assembly work and raise operational efficiency to a new level, while not compromising the flexibility and robustness of traditional installation methodologies.

The vessel further stands out as the world’s first crane vessel with dual-fuel engines running on Marine Gas Oil (MGO) and Liquefied Natural Gas (LNG). Coupled with an IMO- and US Coast Guard-approved ballast water management system, Sleipnir will operate sustainably across all environmental jurisdictions.

In the offshore wind sector, Heerema sees a significant growth in the size of wind turbines and foundations, which requires specialised equipment for their installation.

With its large cranes capable of a 129-metre lifting height and a combined 20,000-tonne lifting capacity, Sleipnir is very well placed to accommodate this trend of increasingly bigger offshore wind turbines.

Speaking at Sleipnir’s christening in Tuas Boulevard Yard this evening, Mr Pieter Heerema, Chairman of the Board at Heerema Marine Contractors, said: 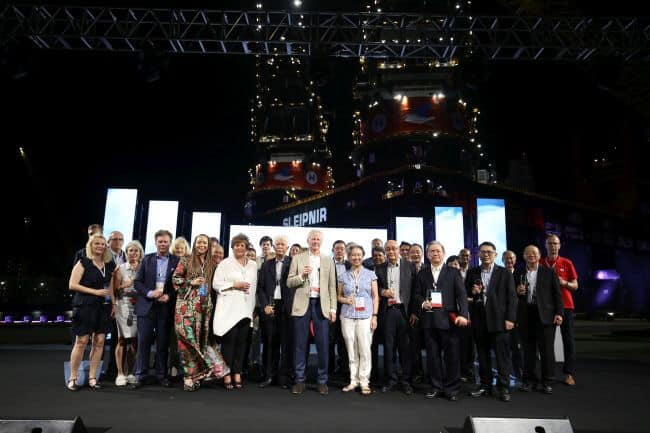 “I am immensely proud that Heerema Marine Contractors is again taking things further with the introduction of our new semi-submersible crane vessel. Sleipnir scores several firsts in the industry: It is the largest crane vessel yet built; it has the strongest pair of revolving cranes; and it’s also the world’s first crane vessel with dual-fuel engines running on MGO and LNG, dramatically reducing harmful emissions. Sleipnir’s innovative capabilities will place Heerema even firmer at the forefront of developments in the offshore oil, gas and wind energy industry for both installations and decommissioning.”

Mr Heerema added: “Sembcorp Marine in Singapore was chosen to build Sleipnir for their professionalism and dedication to the project. The excellent cooperation between Heerema and Sembcorp Marine ensured that the project was executed smoothly, on budget and according to the best possible safety and quality standards.”

At its peak, the construction of Sleipnir involved up to 3,700 workers in a single shift. The project has a current Lost Time Injury Rate (LTIR) of 0.35 per million man hours worked, a commendable safety performance which Sembcorp Marine President & CEO Mr Wong Weng Sun said reflects the Group’s strong safety commitment.

Mr Wong said: “In a safe environment, we can bring our best-quality work into building a reliable vessel, and this in turn helps ensure the safety of the future officers and crew aboard. Our safety mind set therefore goes beyond the successful completion of a project. It effectively complements our continuous focus on innovation and technology development, enabling us to deliver world-class products to Heerema and all other customers.

“Sembcorp Marine is grateful to Heerema Marine Contractors for giving us the opportunity to build the world’s biggest, strongest and first dual-fuel semi-submersible crane vessel at our flagship Tuas Boulevard Yard.”

The vessel will leave for sea trials shortly and is scheduled for delivery to Heerema soon afterwards.