Early investigations looking into the source of the massive explosions at the port of Beirut have suggested the involvement of ammonium nitrate and fireworks. The explosive chemicals were supposedly confiscated and stored from a cargo ship since 2013.

The large scale destruction caused by the explosions on Tuesday has sent the city of Beirut in a tizzy, a shockwave that only added a brick to the burden of Lebanon’s overwhelming effects of the pandemic and the worst ongoing economic crisis in decades. The enormous amount of the volatile chemicals stored in unsafe conditions, close to fireworks seems to have been the trigger to the blast.

Poorly stored ammonium nitrate would still require additional fire to ignite it and cause destruction on a scale as such. Assessments so far have considered the fireworks and the sunny day temperature of 30-degree Celsius, but are still unclear about a concrete cause. 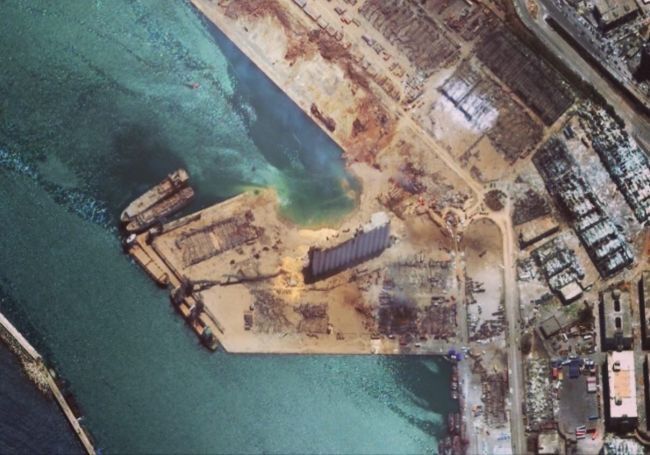 Videos on the internet taken during the initial moments of the disaster show sparks, lights and smoke rising from the fire indicating the presence of fireworks. A popping sound was claimed to be heard from the centre of the fire along with faint sounds of what could have been whistling. These are characteristics of fireworks, assessed experts dealing with explosives.

Jeffrey Lewis a missile expert added that it is a common occurrence to have fires detonate explosives. He also explained that the white cloud accompanying the blast was a condensation cloud, which is seen commonly in explosions caused in humid conditions. The orange clouds that followed were likely from toxic nitrogen dioxide gas released during explosions involving nitrates.

The ammonium nitrate that caused the explosion is suspected to have carried by the Russian ship MV Rhosus that was seized in 2013 due to technical problems that halted its voyage and docked ever since. The vessel, sailing under a Moldovan flag had not had its license renewed following which it was removed from the national register, confirmed Igor Zaharia, director of the Moldovan Naval Authority.

The registration of foreign vessels with technical issues has been a common report of corruption scheme taking place, that has now placed Moldova on a ‘blacklist’ issued by Paris MoU, that monitors naval traffic from North America to Europe.

While it is still not explained as to why the compound that was dangerous to exposure wasn’t offloaded or stored in a more secure space, email exchanges between Prokoshev and Beirut-lawyer Charbel Daher show that numerous efforts to appeal to legal authorities regarding storage and/or re-export were not reverted. State security and Customs too had brought it up, but the issue had not been resolved.

The explosion has caused about 100 confirmed deaths so far and over 5000 injuries while also causing windows to shatter at buildings and homes throughout the city.