In a harbinger of expected protests over Royal Dutch Shell’s plan to store Arctic drilling rigs in Seattle, an activist perched herself on a 15-foot tripod on Tuesday to try to block the entrance gates of a company fuel-transfer station.

The incident came a day after the U.S. Department of the Interior conditionally approved Shell’s plan to explore for oil in the Chukchi Sea off Alaska, where it has not drilled since a mishap-filled 2012 season.

Environmental activists are also preparing for three days of demonstrations starting on May 16 against Shell’s plans to store two drilling rigs in Seattle. Among other plans, activists say they will meet one of the drilling rigs in kayaks as it arrives in the port later this week.

Early on Tuesday, backed by other anti-Shell activists, Seattle resident Annie Lukins erected the tripod on Harbor Island, according to a news release and image. It was unclear if she was arrested.

“I want the next generation to be able to eat fish from the ocean whose flesh doesn’t carry the killing toxins of crude oil,” Lukins said in a statement. “We need to ban Arctic drilling now.” 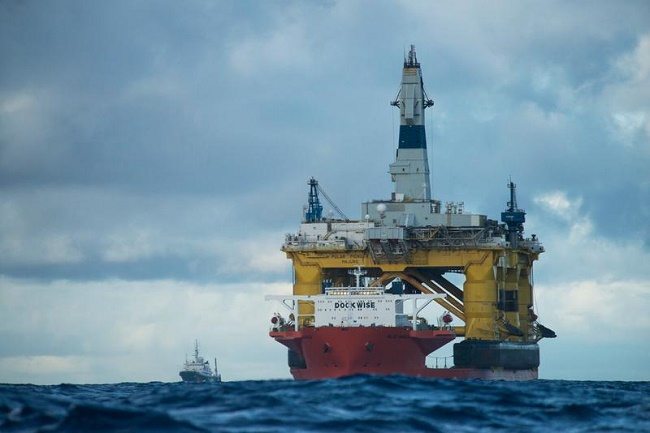 The Puget Sound region has a decades-long history as a hub for equipment used in energy drilling in Alaska even as some environmental groups and politicians have pushed for the region’s economy to move beyond oil, gas and coal and into clean energy.

Seattle’s planning department ruled the city’s port must apply for a permit for the company to use it to store drilling rigs, a decision shipping company Foss Maritime has appealed.

The Port of Seattle was to vote on Tuesday whether to appeal the city’s interpretation of the permit requirements, a spokesman said.

Shell said in a statement it respected the rights of protesters engaging in safe, lawful demonstrations against its Arctic plans.

While the price of oil has fallen over the past year, the Arctic is coveted by energy companies for its long-term potential. The Arctic is estimated to contain about 20 percent of the world’s undiscovered oil and natural gas, with some 34 billion barrels of oil in U.S. waters alone.