It was also announced that the first ship will be named CCGS Sir John Franklin in honour of a British Royal Navy officer and explorer of the Arctic. Found in September 2014, Franklin’s ships are an important part of Canadian history given that his expeditions, which took place nearly 200 years ago, laid the foundations of Canada’s Arctic sovereignty.

“Seaspan is changing the course of shipbuilding history on the west coast of Canada, and today’s ceremony marks the most significant milestone yet for the National Shipbuilding Procurement Strategy (NSPS),” said Brian Carter, President, Seaspan Shipyards. “Today is day one of many years to come of planned ship production at Vancouver Shipyards for the Canadian Coast Guard and the Royal Canadian Navy. This is thanks to NSPS and we are grateful that federal Minister Finley is here to celebrate with us the official start of our first vessel, the OFSV.” 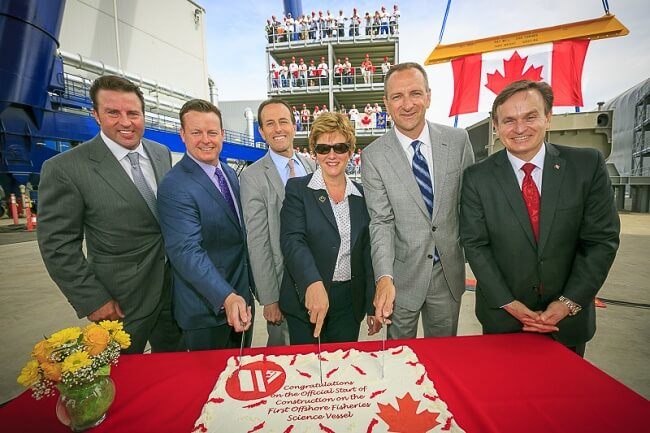 Seaspan’s steel-cutting event follows the recent awarding of an incentive-based build contract to VSY for the construction of three OFSVs, which will be delivered together under a ceiling price of $514 million before the end of 2017. Following the completion of the OFSVs, Seaspan will then build one Offshore Oceanographic Science Vessel (OOSV), two Joint Support Ships (JSS), one Polar Icebreaker (PIB) as well as up to five Medium Endurance Multi-Tasked Vessels (MEMTVs) and up to five Offshore Patrol Vessels (OPVs), with more opportunities to follow well into the future.

“This announcement marks the resurgence of sustained employment and long-term economic activity within Canada’s shipbuilding and marine industrial base across the country. Seaspan is proudly building the next generation of vessels for the men and women of the Canadian Coast Guard and Royal Canadian Navy,” said Brian Carter.

To date, Seaspan has signed over 200 contracts with 137 companies in Canada, with half of their value going to small and medium-sized businesses.

It is estimated that Seaspan’s NSPS work will create 5000 direct, indirect and induced jobs over the next 20 years, produce almost $500 million per year in GDP for B.C.’s economy, and mean thousands of people will get the opportunity for an exciting new career in shipbuilding.