The Liberal government made an important announcement in Vancouver to renew Canada’s Coast Guard fleet. The announcement underscored the critical role played by the Coast Guard on Canada’s three oceans to keep our waters safe, secure and open, and to promote and protect our marine habitat. 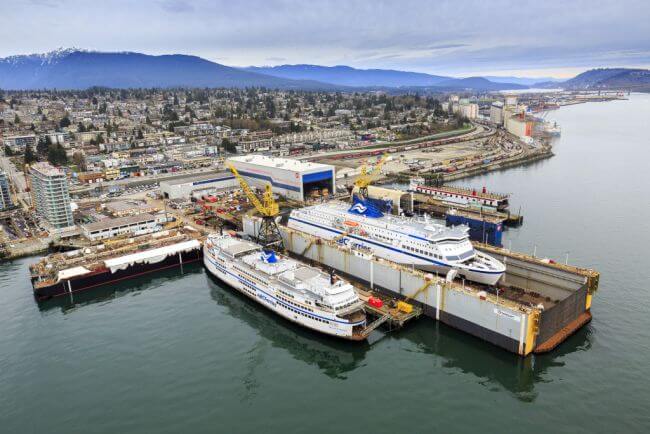 As part of the Government’s recapitalization plan for the Coast Guard, Seaspan Shipyards will design and build 16 Multi-Purpose Vessels. This announcement represents an important vote of confidence in Seaspan as a centre of shipbuilding excellence and a considerable relief to those within our workforce who, until today, have not had clarity into their future.

Seaspan appreciates the efforts of all those responsible for today’s announcement about the future work we have been expecting, and what we have invested heavily for, since being selected in 2011 through a competitive, fair, open and transparent procurement process as one of two shipyards to build large vessels for the Canadian Coast Guard and Navy for the next 30 years.

Under the NSS to date, Seaspan has created thousands of new jobs and career opportunities, strengthened BC’s marine industrial sector, and committed $850 million in contracts to our supply chain of over 570 companies across Canada. We are about to successfully deliver our first new ship to the Coast Guard, launch the second ship so it can begin sea trials, and work on the third ship is progressing as scheduled.

Today’s announcement that the Government intends to run a process to select a third Canadian shipyard under NSS is an unexpected and disappointing development.

Seaspan believes that a third shipyard building large vessels in Canada will return us to the boom and bust cycles that defined previous federal shipbuilding programs, and undermines the founding principles of the NSS that identified two shipyards as Canada’s strategic partners and centres of excellence for federal shipbuilding – a large combat vessel shipyard on the East Coast and Seaspan as Canada’s large non-combat vessel shipyard on the West Coast.

We will need to discuss with Ottawa, on an urgent basis, the financial and workforce implications to our business of the federal government’s decision. Based on the outcome of those discussions, we will know whether today’s announcement is good for shipbuilding in BC and for our supply chain across the country.

ABB To Provide Comprehensive Vessel Services To Canadian Coast Guard Fleet
ABS On Course To Class More Than 100 Vessels For Seaspan
Watch: This Hollywood Style Video Of Canadian Icebreaker Will Leave You Impressed