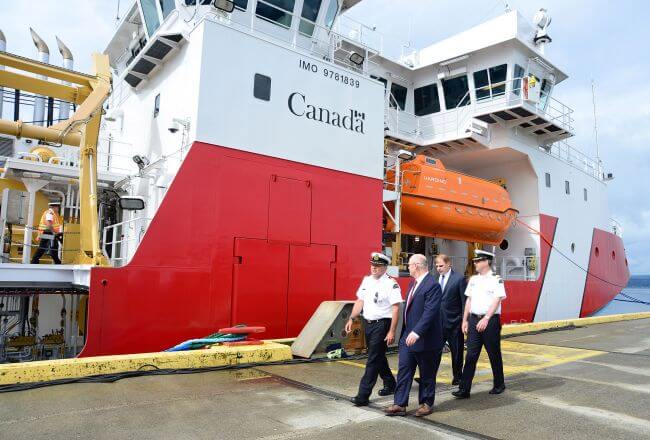 The delivery of the first OFSV is the culmination of years of work by hundreds of dedicated Seaspan employees and supply chain partners from across Canada. As the first large vessel to be built and delivered to the Government of Canada under the National Shipbuilding Strategy (NSS), it also marks a significant milestone in the rebirth and revitalization of the Canadian marine industrial sector. This achievement follows another important milestone with the recent successful launch of OFSV 2, the future CCGS Capt. Jacques Cartier on June 5. OFSV 2 is currently undergoing systems commissioning in advance of the commencement of sea trials this fall. OFSV 3, the future CCGS John Cabot, will be structurally complete by the end of summer 2019.

Designed and built by Seaspan, the 63.4m OFSVs are one of the most complex ships of their size and type. Specifically designed to meet the needs of the Canadian Coast Guard and scientists, these vessels feature a variety of innovative systems including high-tech fishing trawls, laboratories and a deployable drop keel. The vessels will serve as a platform for Fisheries and Oceans Canada scientists to monitor the health of fish stocks, better understand the impacts of climate change and support oceans research.

Under the Government of Canada’s NSS, Seaspan has significantly expanded its workforce, created a growing marine supply chain, and invested over $200M to upgrade its shipyard for the long term program of work ahead. Through its NSS-related work, Seaspan has issued over $935M in contracts to approximately 630 Canadian companies, including over $405M in contracts awarded to 472 BC-based companies. Through its work under the NSS Seaspan is creating jobs, enabling new export opportunities and encouraging economic growth from coast to coast. 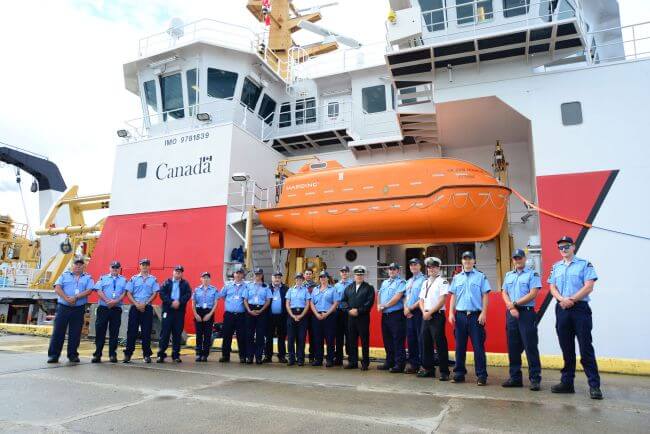 QUOTES
“Seaspan Shipyards is proud to celebrate the delivery and acceptance of the first vessel designed and built under the NSS. This remarkable achievement is the result of the hard work and dedication of hundreds of talented Seaspan employees and supply chain partners from across Canada. When you build ships, you build more than ships. We are building an industry, we are building careers and we are building a vital sovereign capability to design, construct and sustain state-of-the-art vessels that fully meet the operational requirements of the women and men of the Canadian Coast Guard and Royal Canadian Navy.”
– Mark Lamarre, Chief Executive Officer, Seaspan Shipyards

“Today marks a significant milestone for the National Shipbuilding Strategy with the very first large ship, the CCGS Sir John Franklin, built and delivered by Seaspan Shipyards. Our government is committed to renewing Canada’s federal fleet, and this new Offshore Fisheries Science Vessel will support our women and men of the Canadian Coast Guard in carrying out their vital work. The Strategy is providing Canadians with important economic benefits, and we thank all the workers at Seaspan for helping to deliver a modern, world-class vessel.”
– The Honourable Carla Qualtrough, Minister of Public Services and Procurement and Accessibility

“On behalf of the Government of Canada, I am proud to accept the CCGS Sir John Franklin to the Canadian Coast Guard fleet. This is the first of many large ships to be built and delivered to the Coast Guard under the National Shipbuilding Strategy. The addition of the new Offshore Fisheries Science Vessel to our Canadian Coast Guard fleet is a significant milestone for the shipbuilding industry, and for the protection of our oceans. This new vessel means that our federal marine scientists, and the women and men of the Coast Guard will be working together with the best possible equipment to carry out their important scientific research. Congratulations to Seaspan’s Vancouver Shipyards and all those involved in delivering the first of a new generation of state-of-the-art vessels helping to revitalize the federal fleet, and strengthen Coast Guard capacity.”
– The Honourable Jonathan Wilkinson, Minister of Fisheries, Oceans and the Canadian Coast Guard