The H.E.R.O. Awards have been developed in cooperation with IMRF partner McMurdo, a global leader of emergency readiness and response solutions, and draw attention to the life-saving work done in Search and Rescue (SAR) across the world. 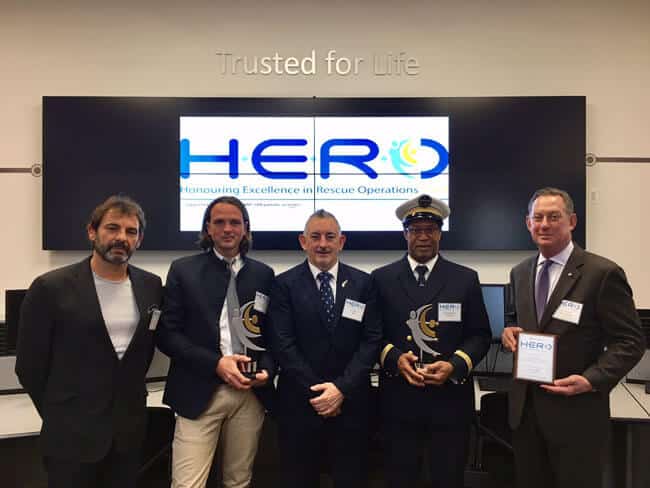 The categories for the awards include team, individual, innovation and technology and the first H.E.R.O. Award for outstanding service to maritime search and rescue – ‘The Vladimir Maksimov Award’, sponsored by Inmarsat – a tribute to the Inmarsat former Director of SOLAS Services, who died earlier this year. In recognition of his considerable contribution to search and rescue, Vladimir also posthumously received a lifetime achievement award.

The winners announced last night are from Morocco, Mohammed Drissi, and ‘The Vladimir Maksimov Award’; from France, Captain Herve LEPAGE for the individual award; from Greece, Proactiva Open Arms for the team award and the UK and Ireland’s Royal National Lifeboat Institution’s (RNLI) James Benson and Bournemouth University for the technology award.

Said Bruce Reid, CEO, IMRF: “We have all been impressed and humbled by the quality of the nominations for these awards. We congratulate the winners and thank all the nominees for their selfless commitment to saving lives across the world. 10s of 1,000s of people are rescued every year, the awards are our way of saying thanks to everyone involved in the SAR.”

Mohammed Drissi first became aware of search and rescue in 1996 when his 148m RORO (Roll-on/roll-off) ship rescued 12 people that had been aboard a small wooden vessel that was in distress in rough seas. This was his very first search and rescue mission and it would not be his last…it inspired him to learn more.

After joining the Moroccan Ministry of Fisheries in 1998 he soon became a SAR regional coordinator and by 2000 he was overseeing the development of the Moroccan SAR services as part of RMRCC Rabat. To this day he continues to dedicate himself to search and rescue as the Regional Coordinator for IMO for the Rabat SAR region. This region links 6 countries and he works across the borders and boundaries demonstrating true leadership in guiding the SAR development across the Regions of Africa.This is just a small glimpse at the influence that Mohammed has had on search and rescue and over 20 years after his first encounter with search and rescue he is still sharing his experience and knowledge with the search and rescue community.

Captain Hervé LEPAGE, Master of CMA CGM ROSSINI and crew won their individual contribution award for the skilled search and rescue of the crew of the upturned catamaran Llama Lo off the South African Wild Coast on the 18th October, 2015. Hervé Lepage is master of the 277-meter (910 foot) French registered container carrier CMA CGM Rossini, and was involved in the search for Jean Sitruk, 65, and Kyle Castelyn, 20, after their capsized catamaran Llama Lo was found 50 miles off the Wild Coast, on South Africa’s south eastern shores.

Jean, from Lyon, France, and his crewman Kyle, from Strand, Cape Town, were on passage from the Maldives. The yacht was on autopilot, making 12-13 knots in rough seas. Both men were down below when, with a loud bang, the yacht momentarily stopped and then swung hard to port. Kyle saw a whale on their port side and water was flooding into the hull through a 70 centimetre (28 inch) hole. After watching the container ship for more than two hours slowly coming towards them Captain Lepage sailed the Rossini up to the little yacht tender, leaving Kyle and Jean only a few metres to paddle to the side of the ship.

The Proactiva Open Arms Team won the team award for the traumatic rescue of several hundred victims of people smuggling whose vessel broke apart in the sea off Lesbos with considerable loss of life. The team found hundreds of people in the water, some holding together around large pieces of wood that had once been part of their boat, and saved as many of them as possible. A huge, old wooden boat fishing boat, so overcrowded the upper deck had collapsed, had capsized near the border line between Turkey and the north of Lesvos.

More than 350 people fell into the water between huge pieces of the broken boat. That day the sea was rough and it soon became apparent that they would be the only team able to make a safe approach to the victims. They had to choose among hundreds of people who would be rescued first, sometimes taking children from the arms of their mothers. One of the most dangerous parts of the rescue was the transfer to Hellenic Coast Guard and Frontex vessels.

James Benson with the RNLI and Bournemouth University design department, who won the technology award, have worked together to develop an original and innovative design by James. The “Bottle Buoy” is aimed at low resource communities and is a minimum cost flotation device that can be used as public rescue equipment and swimming instruction. The device is simple and allows 3 soft drink/water bottles to be attached to a central hub and produce around 60N of Buoyancy.

Discarded plastic drinks bottles are now in abundance in many low resource environments. Instructions and a simple template have been developed to allow the bottle buoy to be produced in the local community using items that could be found easily. Production development and use testing has been undertaken in Bangladesh in partnership with the “Seasafe lifeguard service” in Cox’s Bazar and Bournemouth University’s Faculty of Science and Technology. The Bottle Buoy is now in use in Bangladesh and will undergo further testing before a final resource manual is made open source.

A local award was presented to The Maritime Rescue Coordination Centre – MRCC Lisboa & MRCC Delgada in Lisbon. Portugal has the largest SAR Region of the entire European continent. For a small sized country such as Portugal, this represents a responsibility across an area sixty-two times larger than the mainland, comprising more than 5 million square kilometres. Both centres are responsible for coordinating the search and rescue at sea in the SAR Regions of Lisboa and Santa Maria. In 2015, the Portuguese SAR Service (MRCC Lisboa and Delgada) registered a total of 636 SAR events that resulted in 501 lives saved. This operational result was achieved with a high overall success rate of 97%, as defined by the IMO formulas for efficacy rate of rescue at sea.

The H.E.R.O. Awards 2016 recognise actions that took place, or were completed, in the period 1st July 2015 to 30th June 2016. No applications were accepted for events or actions that fall outside this period.

Entries are open for next year’s award and will close 30th June, 2017. For information go to: http://www.imrfhero.org/