Seafarers’ charity Stella Maris (Apostleship of the Sea) extended a hand of friendship and support to seafarers from Sri Lanka following the Easter Sunday bombings in the country. On North Tees, in the Northeast of England, AoS Port Chaplain Peter Barrigan and Ship Visitors Hugh and Mary Ward held a service on board the tanker B Gas Maud on the night of April 24. 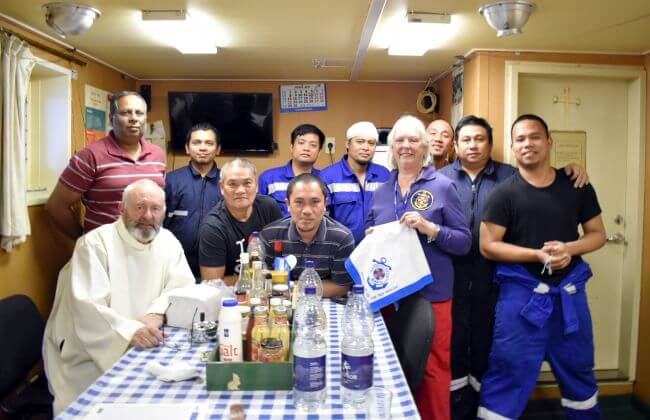 On board were two Sri Lankan seafarers, whose communities back home had been affected by the bombings. The men are Buddhist, but one seafarer and his wife regularly went to St Anthony’s Church in Colombo, well-known as a place of worship open to all religions.

“His wife was due to go to the church on Easter Sunday but decided, at the last minute, not to do so that day,” said Peter. Peter and Hugh and Mary also supported six Filipino crew members who were on the same ship and had asked for prayers after two earthquakes struck the region last week.

“We spoke and prayed with the crew who had been at sea when the attacks occurred. The men were upset about what had happened and anxious to contact their loved ones back home,” Peter said. “It was an anxious time for the seafarers on board but in the midst of the stress and worry, we were able to provide some comfort to them from our visit and the service on board,” he added.