Safety at Sea has announced the shortlist for its 2017 Awards, and SeafarerHelp has been shortlisted for ‘Shoreside Team of the Year’.

Safety at Sea has been promoting safe and secure work practices within the commercial shipping industry for 50 years since its launch in 1967. The Safety at Sea Awards recognise those who improve seafarer competence and risk management with innovations and achievements in the fields of training, operations, equipment and services. 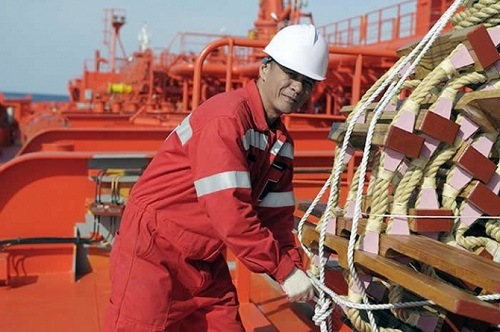 Seafarers rely on shoreside support, and the Shoreside Team of the Year category recognises the efforts of the shoreside team whose actions or intervention has gone beyond the call of duty. ISWAN is delighted that the SeafarerHelp team has been shortlisted for this award, as they regularly go above and beyond their call of duty to assist seafarers and their families in distress, responding effectively and appropriately to diverse situations of varying severity. One such example is the team’s immediate response to the hijacking of the Aris 13 on the 13th March 2017 – read more about the case here.

ISWAN’s SeafarerHelp is a team of ten staff members who often have to work antisocial hours and respond to unexpected crises involving individual seafarers or entire crews. The service is free to seafarers and available 24 hours a day, 365 days a year. The multilingual team members do everything they can to assist seafarers whatever their problem, wherever they are in the world. In 2016, the team assisted over 11,000 seafarers experiencing a variety of problems such as unpaid wages or health issues such as extreme stress or depression.

The winners of the Safety at Sea Awards will be announced in London, UK on the 12th September as part of London International Shipping Week 2017. For more information, please visit sasawards.com.